The Assignment: Create and implement a multiphase plan for the relocation of tens of thousands of museum objects from a temporary space known as the Interim Storage Facility into a permanent Collection Center (CC). Also, move several hundred thousand books and 5500 linear feet of manuscripts. For those of you keeping track, that’s more than a mile. Don’t forget all of the shelving on which they are stored. Oh, and pack and take along seven permanent staff members and their offices. 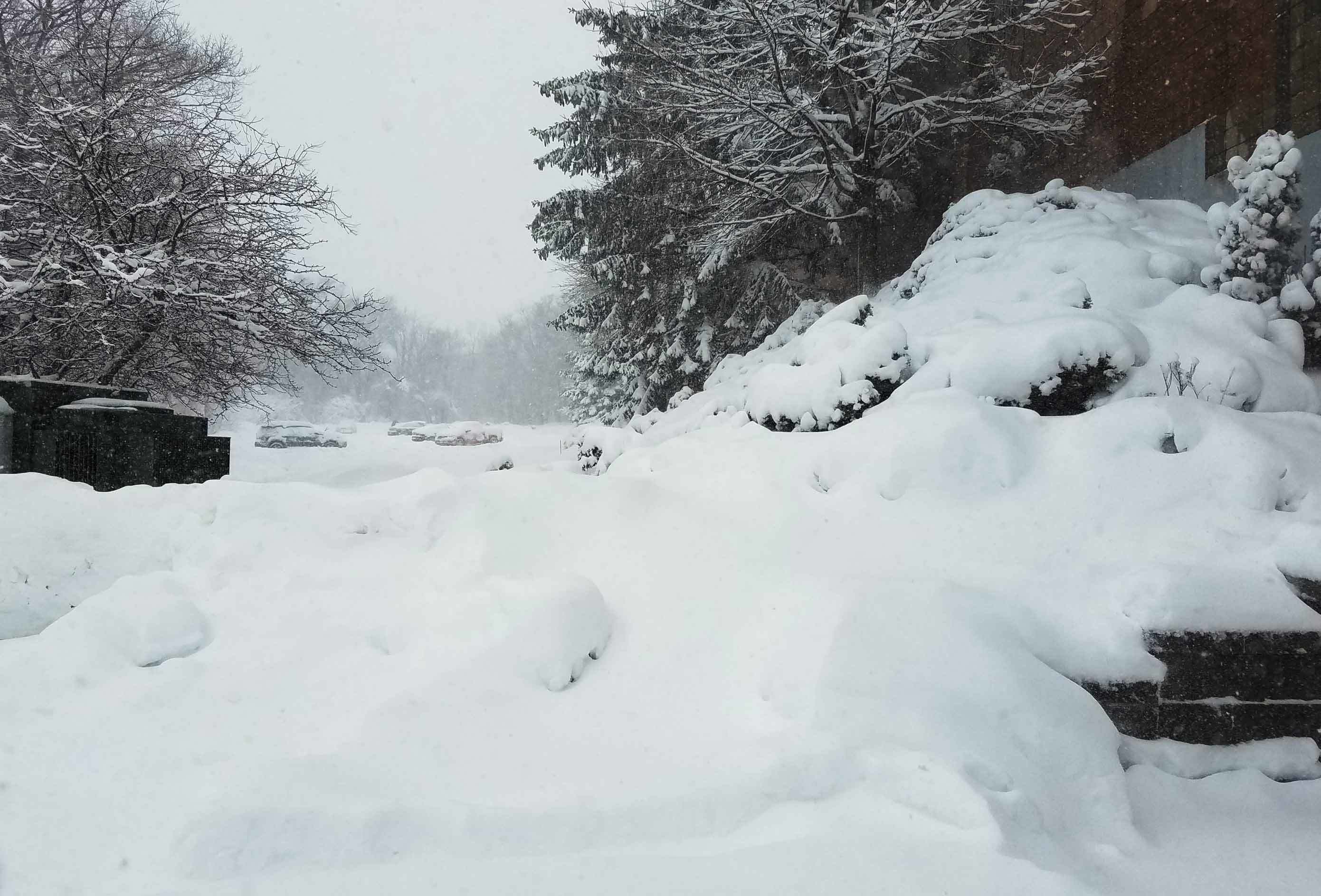 View from outside temporary storage on March 13. Three nor’easters hit in March and shut down the museum. They did not prevent us from working on the project. Photo by Angela Segala

I knew this assignment was coming, but that didn’t prevent it from feeling like a daunting, nearly impossible project. For the last six years, I’ve been a member of the Collections Management Department where the safety and stewardship of PEM’s collection is our ultimate priority. For well over a year before it began, the details of “The Move” took over my daily life. 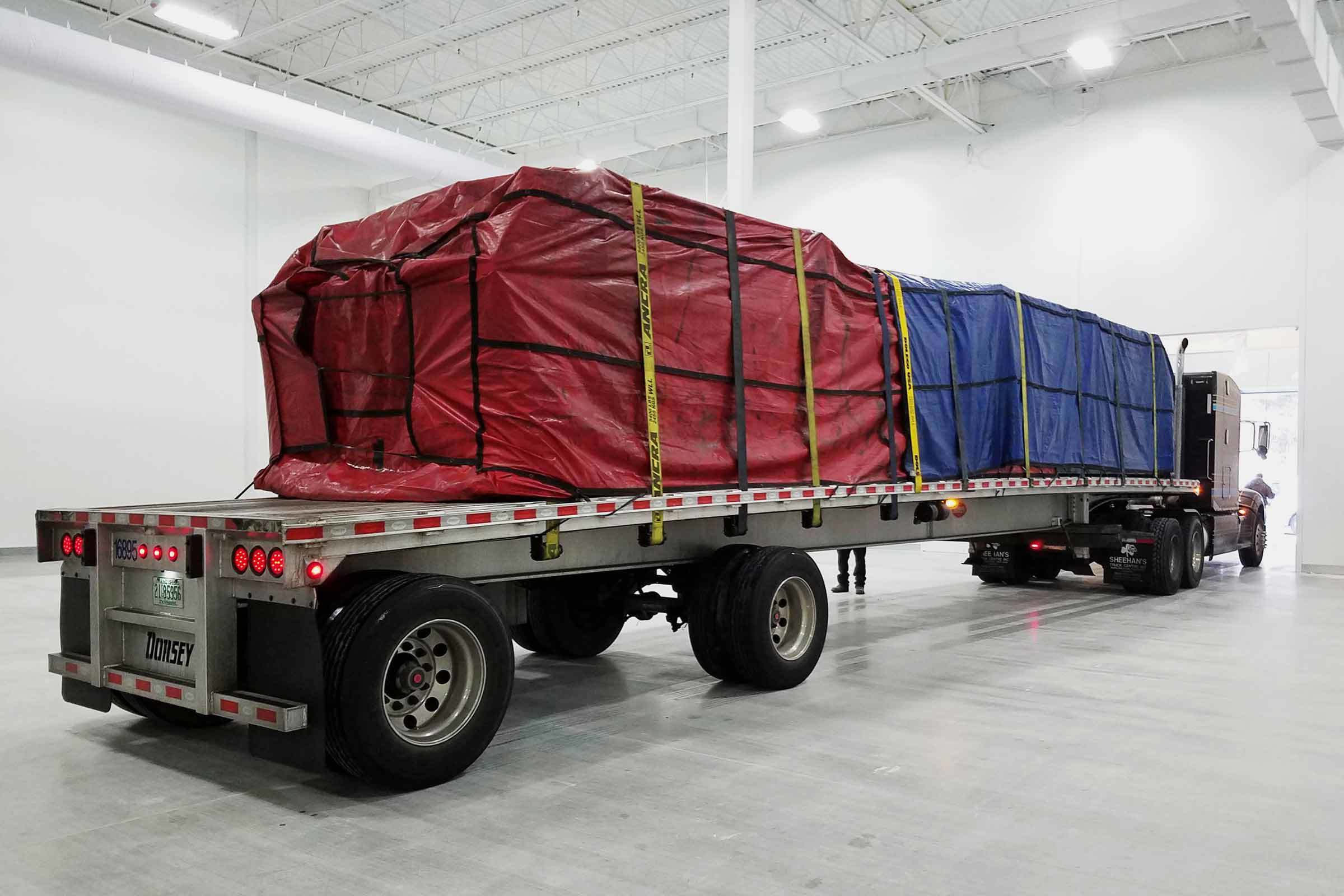 To make things even a bit more tricky, there were layers of deadlines and tasks nested within the project. For example, within the 12-week time frame lurked the deadline to move all museum objects out of temporary storage, in order to meet our lease requirements. Meanwhile, the library collection needed to be arranged in a way to make it more accessible, with room for growth. This required extensive investigation, planning and an intimate knowledge of both collections so that they were primed for long-term care. This was an enormous opportunity and a colossal responsibility. I had a lot of work to do.

Talk to anyone associated with a museum, library, historical society, household or other collecting entity and the problem of limited storage will inevitably surface. It is so pervasive that it was described in the American Institute for Conservation’s 2004 landmark study The Heritage Health Index Report on American Art Collections as a major threat to America’s cultural collections. According to the study, inadequate storage affects organizations of all type, size and age. Simply stated, museums need large amounts of climate-controlled storage.

What some call the Great Hall of the Collection Center. © 2018 Peabody Essex Museum. Photography by Bob Packert

In March of 2017, after an exhaustive search, a 112,000 square foot building was purchased by the museum. After extensive renovations that added an additional 8,000 square feet and upgraded all the building systems, the new building is the museum version of an HGTV Dream House with individual climate control storage spaces for the museum collection, the library collection and programming spaces where related activities can take place.

The Collection Center from the outside. © 2018 Peabody Essex Museum. Photography by Bob Packert

It’s a leap forward in the history of the care of our collection and directly in line with the recommendations by the American Institute for Conservation. It even has oversized doors, a feature that is so coveted I get giddy at the thought of it. Gone are the days when I regret not getting that Ph.D. in geometry to figure out how to move large objects through small passages. 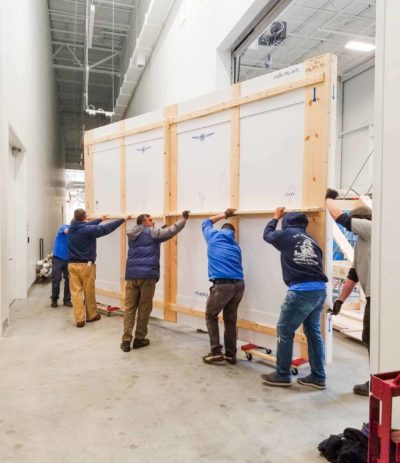 In order to get a better handle on things, we needed to conduct a shelf-by-shelf inventory of our entire library collection to create a detailed 38-page report (front and back) of the current state of storage. This includes planning for future acquisitions.

For more than year, I met with our staff of six librarians to create mind-bending visual plans. They were so complicated that when I shared them with the shelving vendor, it often caused them to physically take a step back. “Whoa!” was the most common reaction. This was all well worth it, as we now have the space to create a rare book section in our storage and space for growth, which would not otherwise be possible. 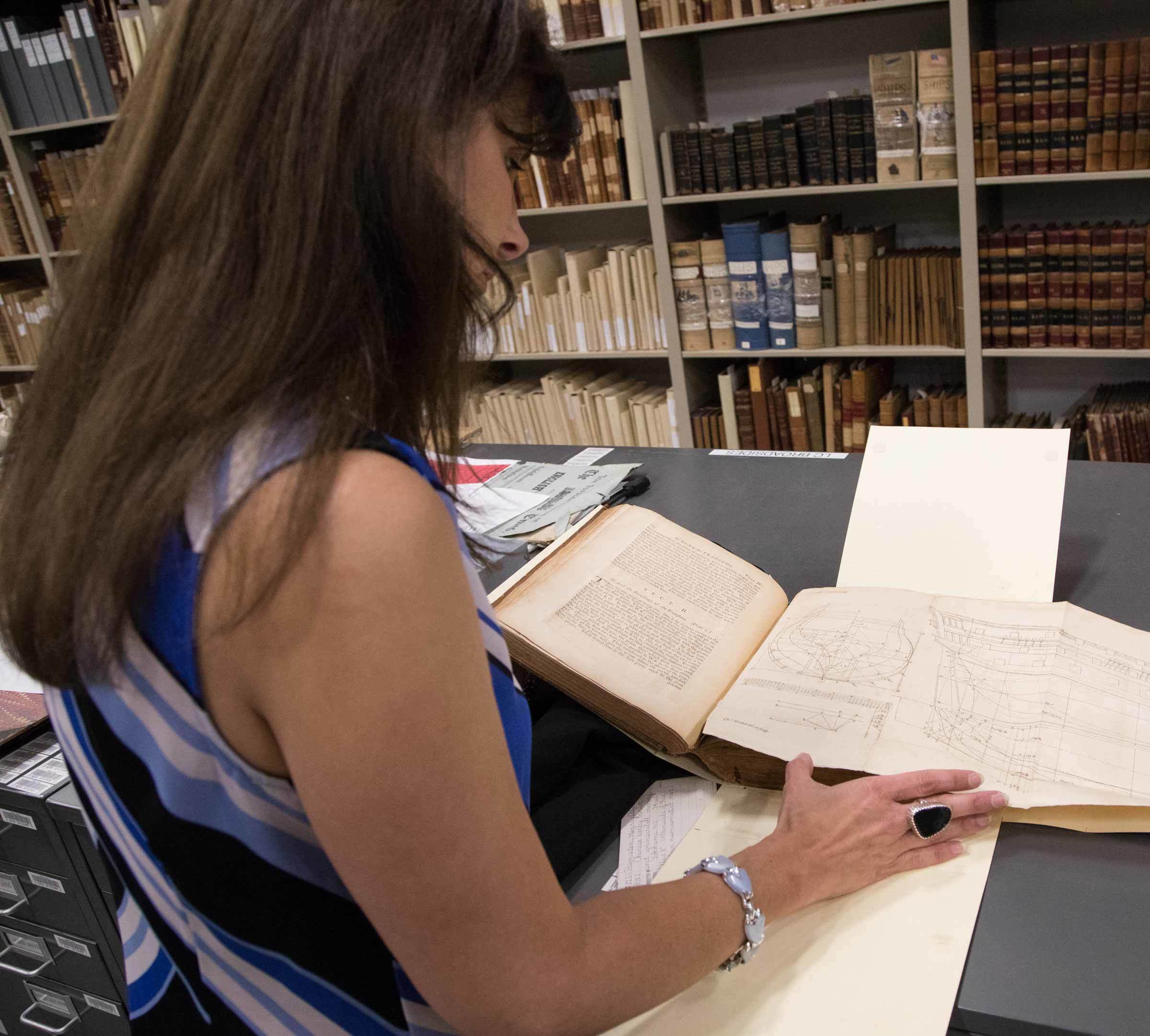 During the moving process, this 1765 edition of “A Treatise of Shipbuilding and Navigation” caught my eye. © 2018 Peabody Essex Museum. Photography by Bob Packert 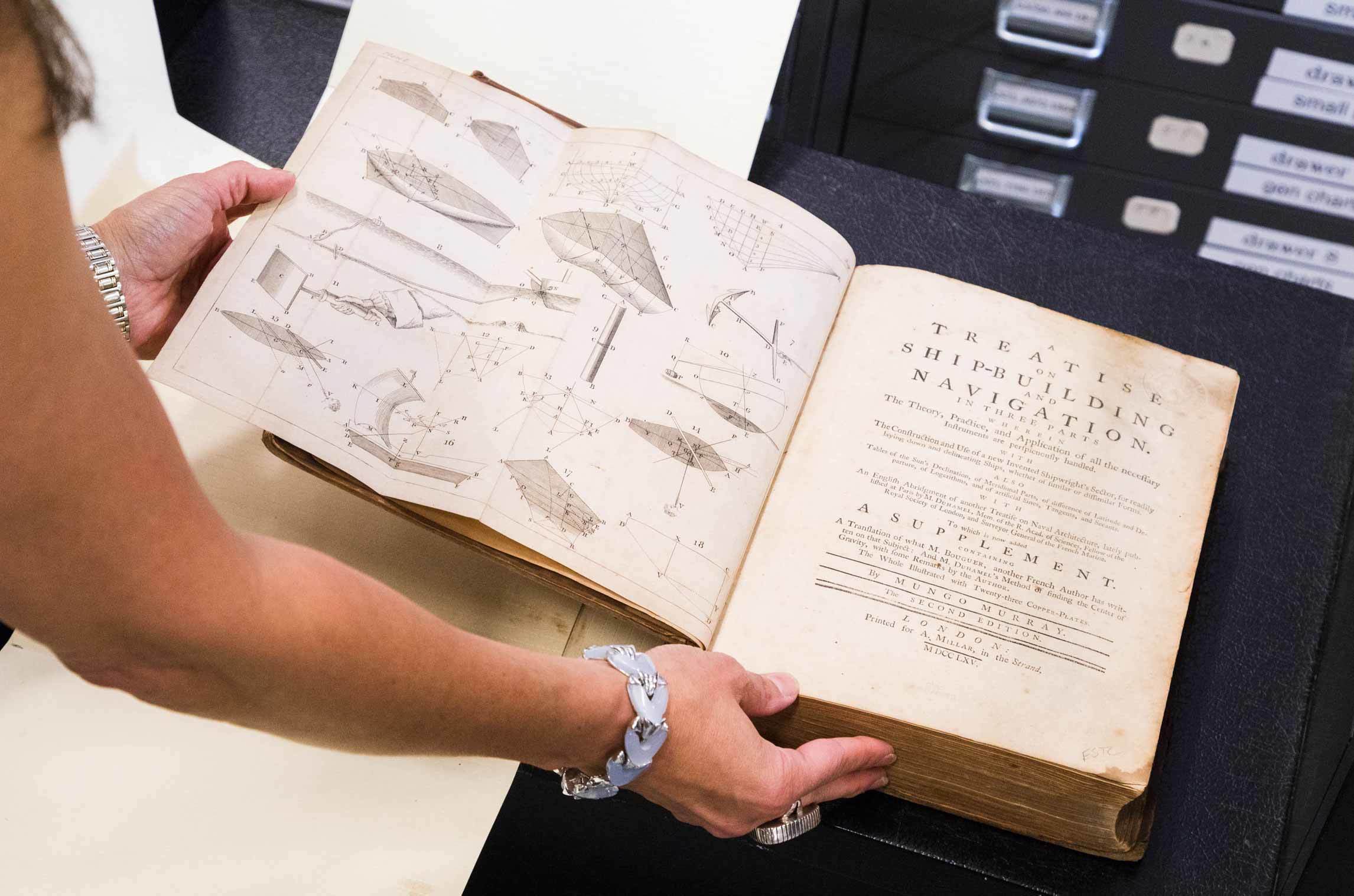 During a moving project, every book is your favorite. But my fondness for this one is multi-faceted: it’s subject matter, its age and what it represents as part of our rare books section. © 2018 Peabody Essex Museum. Photography by Bob Packert

The storage of the museum collection required a different kind of planning. While our objects had been stored on pallet racks 10 feet high, the newly refurbished CC’s high ceilings allowed for pallet racks 20 feet tall. To store objects 20 feet in the air, we had to be deliberate which objects should be at the top, middle and floor levels. So, we conducted a survey of the furniture collection and with the help of our agile and creative art/book handling vendor, created over 80 customized pallets which would keep them safe in transit and give them the flexibility to be lifted to any height needed in their permanent home. Art packers worked on this phase of preparation for months, as we systematically evaluated and calculated their final locations. 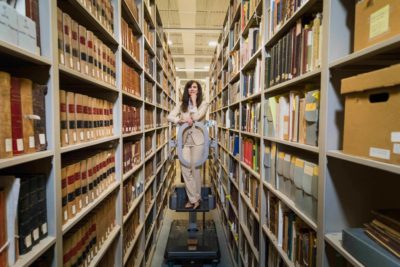 The author in the library stacks. © 2018 Peabody Essex Museum. Photography by Bob Packert

One of the joys of the work we do is encountering an object that stirs curiosity. This “Reclining Bull” which we all thought looked more like a donkey, emerged from storage and became the impetus for my version of a time out. After looking at the information in our Documentation Center (which is now also at the CC), I learned that the bull was given to the Essex Institute in March of 1895. The records state that he was carved in 1793 in Salem and “stood at the head of the Common near East Church as the sign of the tannery of Jonathan Andrew.” He is important, curious, fun, historical and meaningful and has become a sort of a collection team mascot. 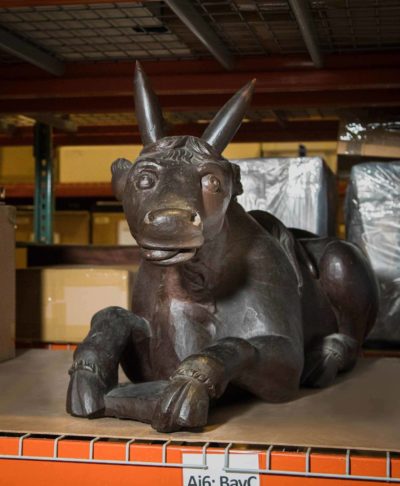 After all of the meetings, planning, research, security considerations, dramatic weather, temperamental cell phones, it came down to this: More than 300 trucks moved 6,434 containers and 2,844 carts filled with objects and library materials over the course of seven weeks. Together, these materials represent more than 12,000 years of global artistic and cultural creativity. 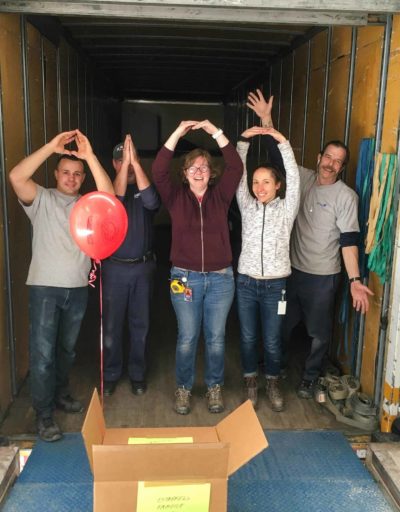 To mark and celebrate the 100th truck, staff in Peabody included this box with a surprise in it for the staff who received it at the CC. It was not the last, but it was exactly halfway into the process. Receiving the surprise balloon, these members of the staff and other art handlers are showing 100. Photo by Tom Hills.

This was accomplished by three museum collection specialists, six librarians, up to 25 art/book handlers, two shelving companies and one project manager. We began this process on January 29 and exited the our temporary space for the last time on the afternoon of April 18, two days ahead of schedule. At times it seemed like an impossible mission but with the hard work of dozens of people, it is a mission accomplished. 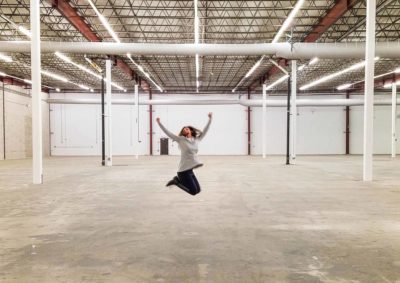 Join us Saturday, July 14 from noon-3pm, for a celebration of the Museum’s new Collection Center — a 120,000-square-foot facility that provides state-of-the-art preservation, protection and care of PEM’s extensive collection of art and culture, and includes the new Phillips Library Reading Room.

The Collection Center is at 306 Newburyport Turnpike, Rowley. Reserve your spot before Saturday, July 7 by registering online at pem.org/collectioncenteropenhouse or by emailing rsvp@pem.org. Buses are available from PEM, with registration. Refreshments will be provided. 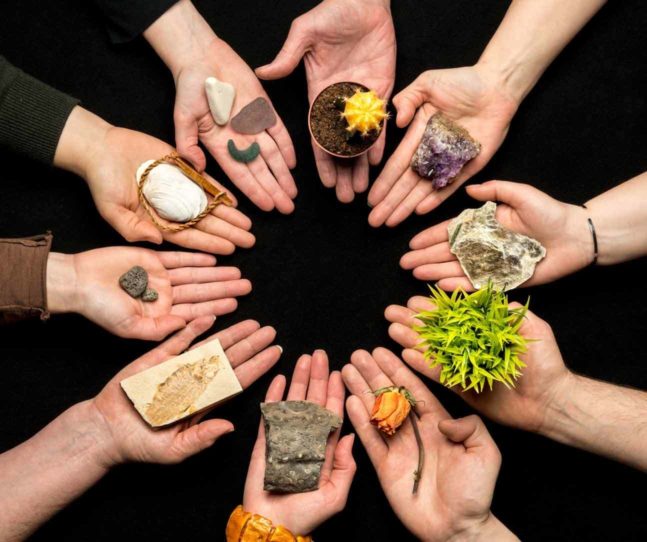 Getting the group shot 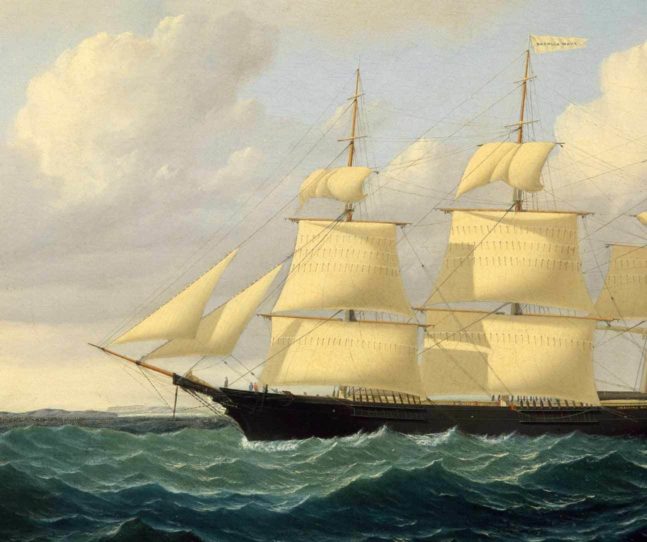 Aboard the Dashing Wave