On the first day of my new job, this sight greeted me at a welcomingly sparse corner desk. 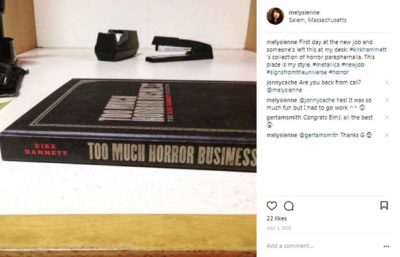 Double-take indeed. Being a millennial, I experienced an emotion while simultaneously posting to Instagram: “This place is my style.”

Why? Well, for starters, metal. Not just that but my favorite type of metal, thrash, and the band that does it best, Metallica! Add to that the intrigue of classic horror movies, which I love, and the beauty and drama of great movie poster design?! This boded awfully well.

Once I figured out that the reason for this mysterious object’s appearance at my desk was PEM’s interest in exhibiting the collection in It's Alive: Classic Horror and Sci-Fi Art from the Kirk Hammett Collection, I perked up. I didn’t know if I was more delighted that a metal god would be gracing our presence, that promoting this would be legitimately part of my job, or that it hit exactly on a personal interest area that I’m pretty nerdy about -- Nerdy enough that I covered it in my thesis research in 2008. 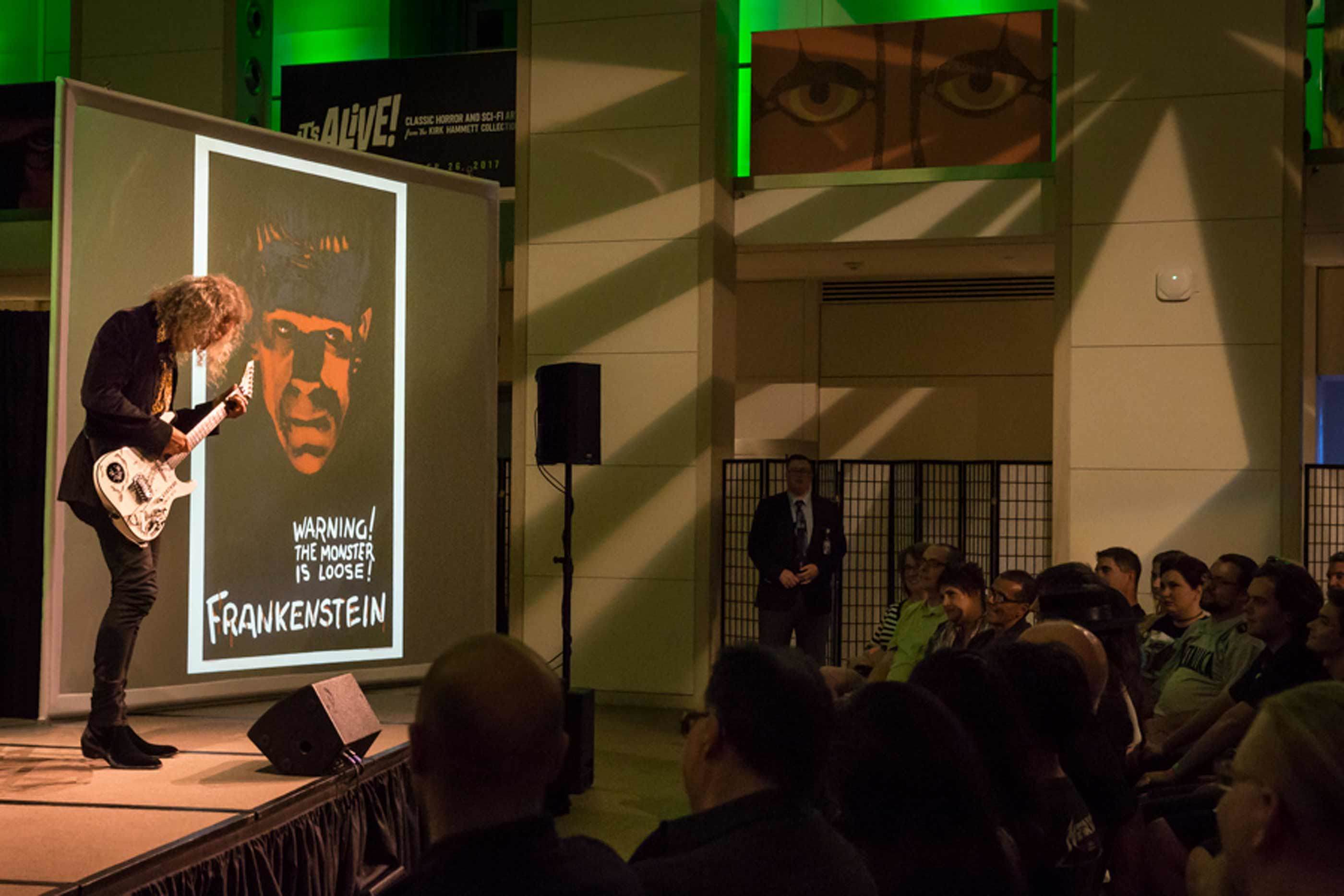 As a Studio Art major at Wellesley College, minoring in Philosophy, I was interested in the imagery of nightmares. Movies and other mass media are a reflection of the societies that produce them, and in that vein horror movies are very much about collective societal fears of their times. PEM speaks to various aspects of this in the wall text in It’s Alive! Godzilla and other tales of nuclear exposure and mutation came out of fear of the atomic bomb, for example, while panic over alien invasion was often inspired by social xenophobia. H.P. Lovecraft, author of the Cthulu mythos of horrific, ancient beings, was an incredible xenophobe. Many people are aware that the zombie genre has roots in race issues, and there was some press about this surrounding the passing of George Romero, father of zombie horror, earlier this year. Jordan Peele’s Get Out (2017), while not classed as a zombie film, successfully revived this fear of race-based usurpation of the body with the story of a series of young black men enslaved through hypnosis by an affluent white community. 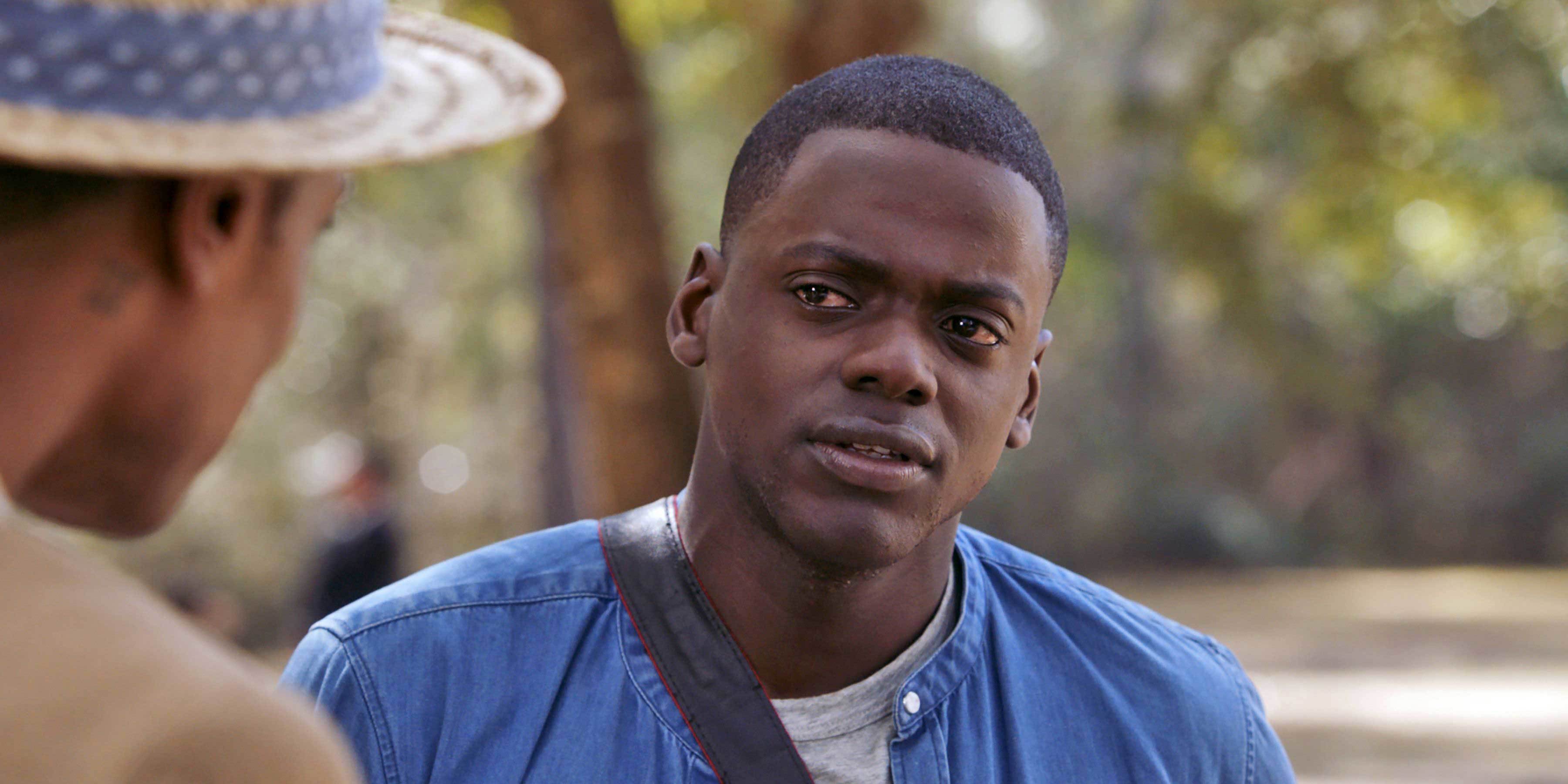 The first horror movies were often adaptations of famous horror and science fiction novels which focused on philosophical questions taken to their logical extreme. These stories investigate broad but deeply resonant material like the boundaries of “humanity”, the dominance of political leadership, and the nature of conscience.

H.G. Wells’ The Invisible Man was really a 19th-century British reimagination of Plato’s Ring of Gyges, in which a man is able to make himself invisible and avoid punishment for his crimes. Wells’ The Time Machine divided humanity into two races of Morlocks and Eloi, meant to signify the proletariat working class and privileged bourgeoisie. Karl Marx’s The Communist Manifesto was published in 1848; The Time Machine was published in 1895, during the Industrial Revolution of late Victorian England.

The Island of Dr. Moreau (the film adaption was titled The Island of Lost Souls (1932)) explores the distinction between man and animal as the rogue Dr. Moreau creates human-animal hybrids in his House of Pain. His method of self-deification and control over the “Beast Folk” calls to mind colonial histories in which certain subjugated races were considered subhuman. Meanwhile, Mary Shelley’s Frankenstein is a cautionary tale against playing god, but also presents us with the most interesting and iconic of grotesque characters in the Monster himself -- “grotesque” as defined as something that elicits both pathos and disgust. 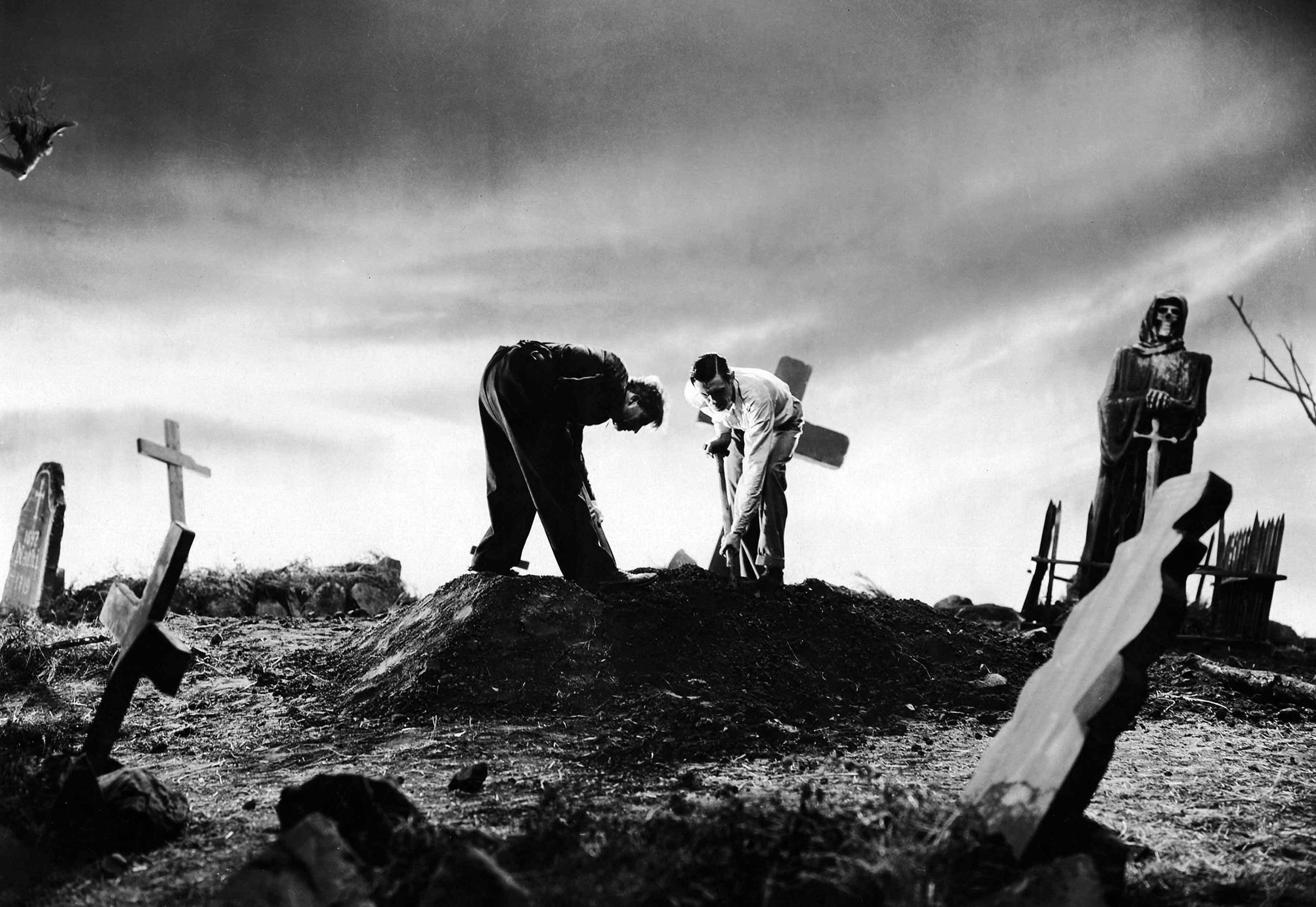 One of my favorite horror films, arguably predating the genre itself, is The Cabinet of Dr. Caligari. Probably the best-known German Expressionist film, it’s immediately recognizable for its dramatically angular and contrasty film sets. The film is actually a political parable rooted in the German Interwar period, wherein a somnambulist (sleepwalker) is hypnotized to commit murders at the bidding of psychiatrist Dr. Caligari. Released in 1920, pacifist film writers Hans Janowitz and Carl Mayer penned it as a critique of World War I, and the “somnambulist” German soldiers’ compulsion to murder on behalf of their government. 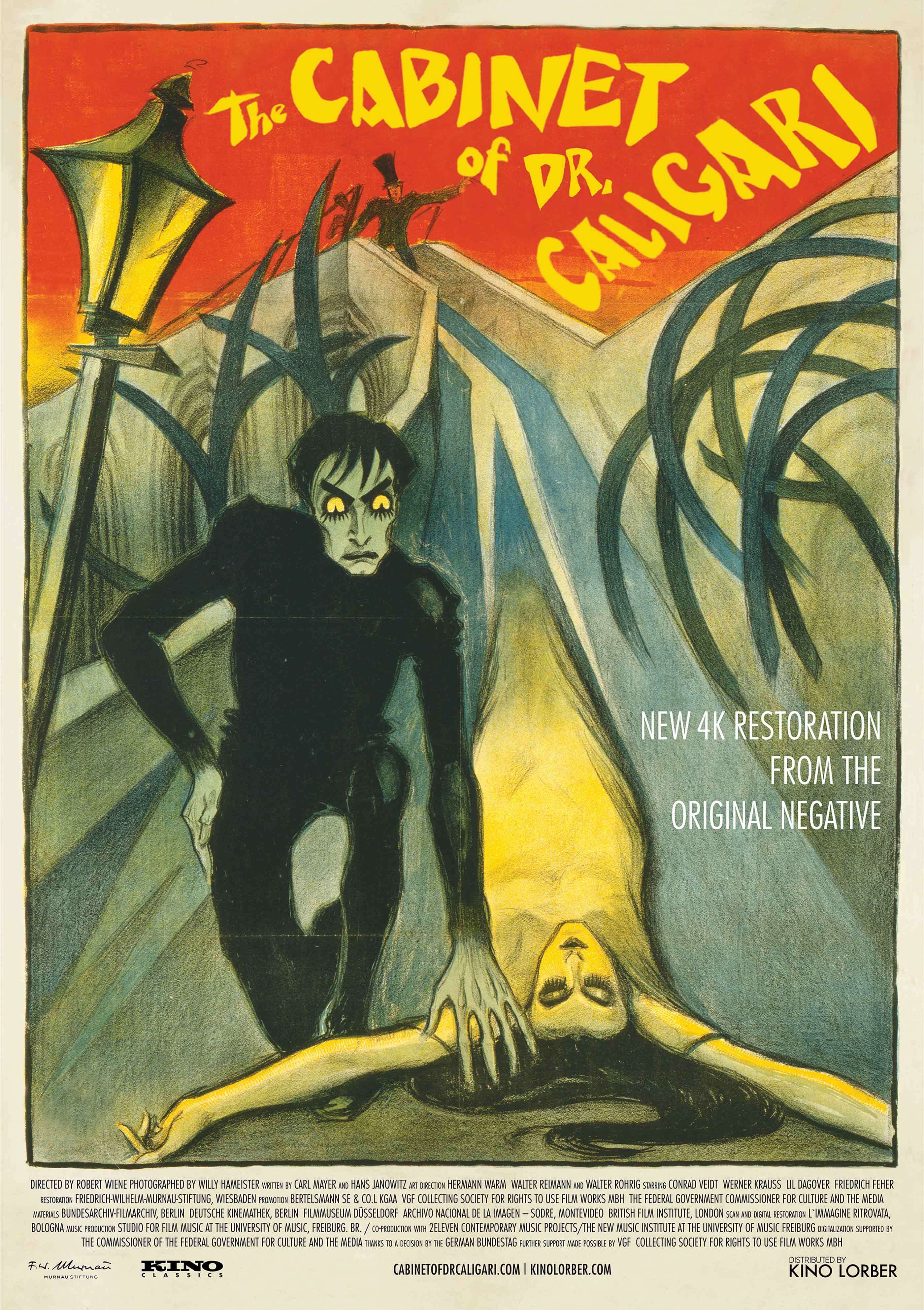 As escapist as horror fiction can be, it’s often inspired by something very real, whether derived from fears found through self-reflection or through observing the horrors of the real world. Kirk Hammett, too, is inspired by the deep feelings that horror stories can arouse in us. In It’s Alive!, PEM unpacks the effect horror movies have on Kirk’s music, beginning with his very first viewing of The Day of the Triffids at age 5.

I find horror both interesting and artistically inspiring because fear is such a primal emotion -- and PEM has covered this topic very well in the exhibition both in the It’s Alive! gallery and in our exhibition catalog, with interviews with writer Steve Almond and neuroscientist Joseph Ledoux. Metal is a primal genre of music, so there’s natural cross-pollination across these media once you recognize that the emotional source is much the same. 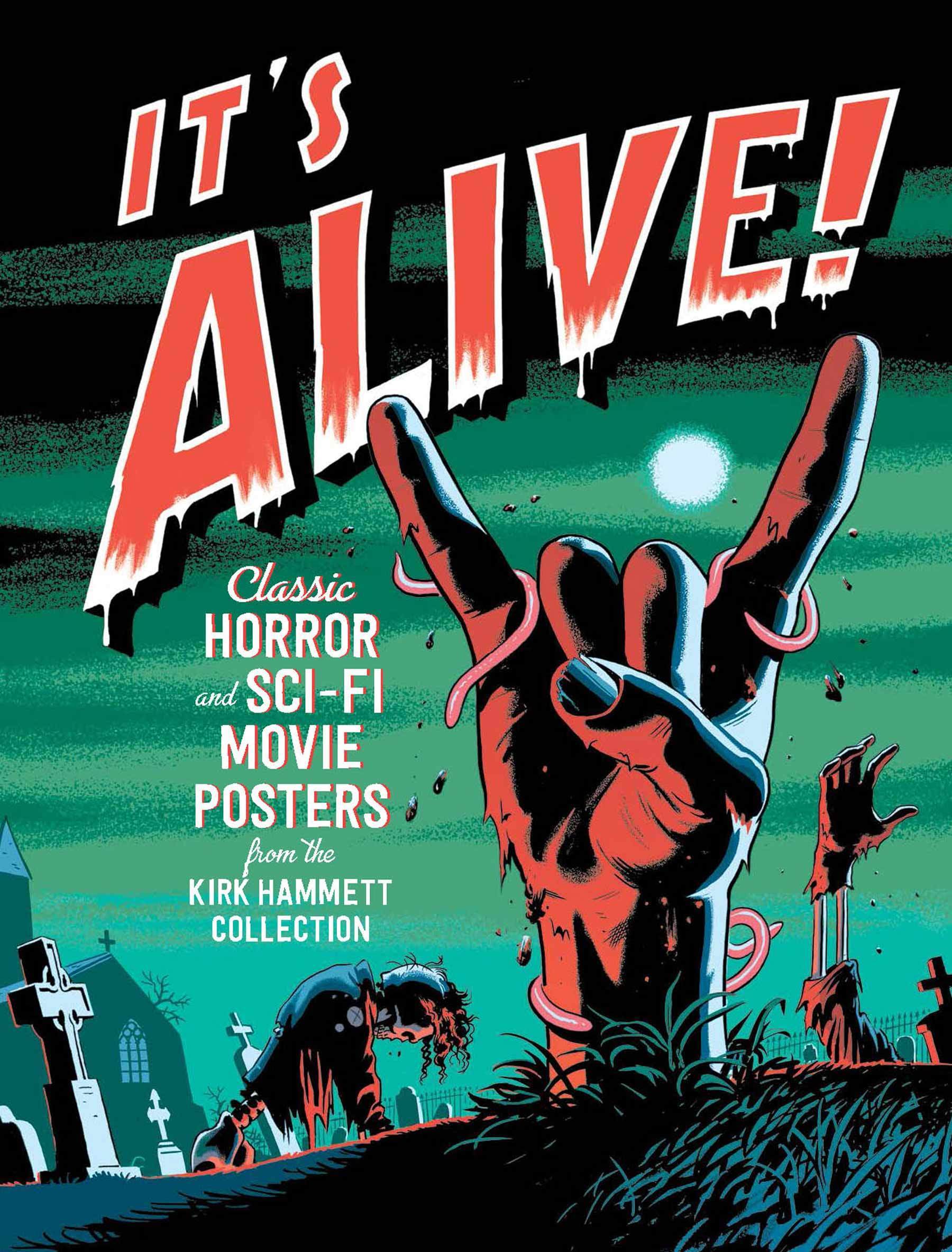 Strolling through Salem, or through any CVS at this time of year, cartoonized versions of Frankenstein’s monster, Count Dracula and their counterparts appear everywhere. While I enjoy the festive side of horror, I hope that It’s Alive!, and all of PEM’s programming around the exhibition, shines a light on how potent and thoughtful “hard” or “scary” things can be, whether in music, graphic artwork, or the flickering light of a movie screen. 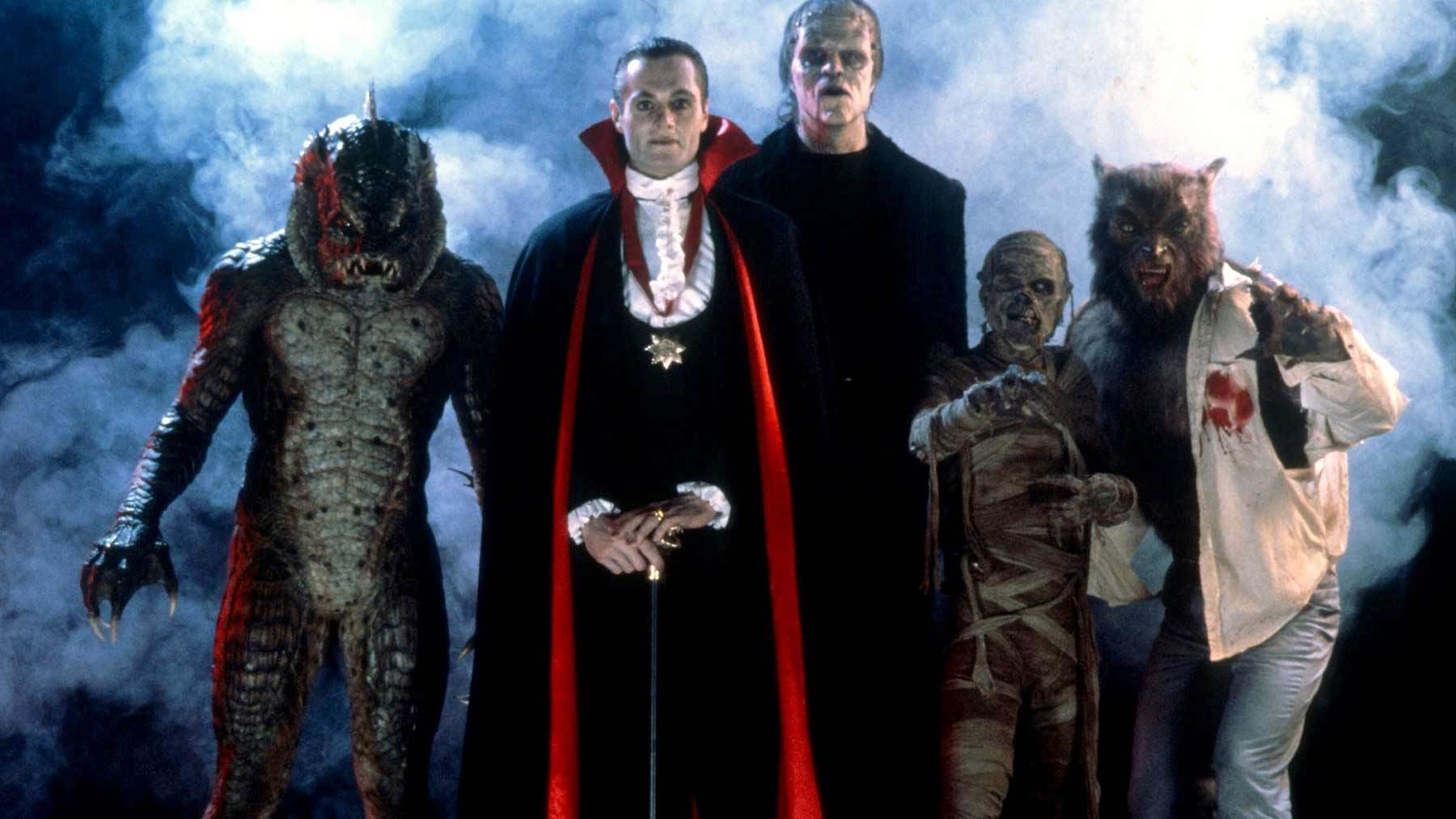