Behind the scenes of The Salem Witch Trials: Reckoning and Reclaiming

It is unusual for PEM to host two exhibitions on seemingly the same subject less than a year apart. You may wonder: What is the difference between the 2020 and 2021 exhibitions on the Salem witch trials?

After the significant visitor interest and response to the 2020 exhibition, in February 2021, a team of PEM staff met to develop a new exhibition to open in September 2021. The team includes three co-curators, an exhibition planner, editor, exhibition designer, graphic designer, registrar, collection manager, lighting specialists and other staff. We were encouraged to develop a new approach to tell the story of the Salem witch trials using a small number of historic objects and original court documents, focus on the collection and community, make connections with PEM’s upcoming Native American and American art gallery and integrate contemporary works and narratives into the exhibition. The team began discussing new angles that would draw out fresh perspectives on this very complex historical event and its relevance today.

A view outside the gallery. Photo by Diana DiRamio/PEM

Over the next six months, the curatorial team, consisting of Dan Lipcan, the Ann C. Pingree Director of the Phillips Library, and associate curator, Lydia Gordon, and me, PEM curator and exhibition co-curator for The Salem Witch Trials: Reckoning and Reclaiming, collaborated on this exciting project. We explored questions such as: Why are the witch trials a defining example of intolerance and injustice in American history? What can we learn from the trials that is meaningful today? We grappled with creating concise panels that explain the many converging reasons that led to this crisis. We also identified two contemporary artists, fashion designer Alexander McQueen and photographer Frances F. Denny, who had ancestral links to the trials and who were inspired to create artworks of power and beauty in response to events of 1692. 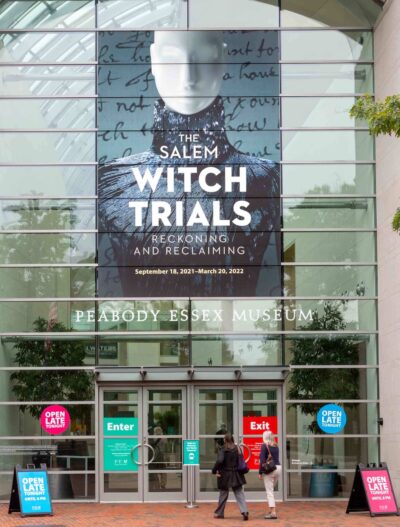 A view of the banner outside the museum. Photo by Kathy Tarantola/PEM.

A view of The Salem Witch Trials: Reckoning and Reclaiming gallery. Photo by Kathy Tarantola/PEM.

New approaches required that we revisit research on the historic objects to develop new interpretive strategies to present these tangible fragments of life in 1692 in ways that would spark visitor imaginations about the original owner’s experiences. Encouraged by our Editor for Curatorial Initiatives, Rebecca Bednarz, we wrote labels that explored symbolic or metaphoric meanings for the objects as well as their history and function. For example, John Proctor’s sundial not only measured daylight hours, but was a reminder of mortality and the need to make best use of one’s time. Prior to execution, John Proctor pleaded for “a little respite of time, saying that he was not fit to die,” a request that went unheeded.

For the Towne family window, a search of the digitized versions of the court documents for references to windows yielded new insight. I learned that a window, situated in between interior and exterior space, was an opening that was used by prying eyes, eavesdroppers or as a point of entry for “witches” and their familiars to gain access to a dwelling and afflict the inhabitants, as claimed in spectral evidence.

The team also developed a new focus on documents and objects associated with a few community members who defended those accused of witchcraft. These brave individuals, at great risk to themselves, spoke in defense of the people accused of witchcraft and testified to their innocence in court.

Each of these rare historic objects were carefully installed by preparator Mollie Denhard and collections management colleagues while exhibition project manager Hannah Silbert tracked all aspects of the project keeping its myriad activities and details on schedule.

It’s easy to give into stereotypes with this kind of material. But PEM’s talented exhibition designers, Lito Karatsoli-Chanikian, Karen Moreau Ceballos and Betsy Hopkins, steered clear of the obvious and instead proposed a color palette that creates a distinctive and evocative setting for each of three sections of the exhibition. Rich earth tones with low light levels provide context for the historic objects and documents in the first section, No One Was Safe. Illumination of the 17th-century window casts a dramatic shadow on the floor and provides visitors with a subtle interactive experience. PEM’s exhibition design team worked with Henry Rutkowski, PEM’s Master Electrician, and Scott Benson, exhibition lighting specialist, to achieve this and other special lighting effects in the galleries. In the Alexander McQueen/Elizabeth How section, deep gray walls recall the darkly dramatic setting of McQueen’s 2007 fashion show. Red illumination below the case displaying the McQueen gown, takes inspiration from a red pentagram that traced the fashion runway in the original fashion show. The lavender-gray walls of the Major Arcana section provide an unexpected lighter color and marks the shift to a contemporary context and themes.

Co-curator Dan Lipcan developed a case study on Elizabeth How that presents the experience of one individual through documents that trace the court process she went through. These include accusations and examinations, testimonies against the accused, indictment and statements by family, clergy and neighbors given in her defense. Sadly, their words were to no avail and How endured conviction and execution for witchcraft in July 1692.

Elizabeth How’s descendent, acclaimed British fashion designer, Alexander McQueen, took up her story over three centuries later, when he learned that his ancestor was executed during the Salem witch trials. McQueen traveled to Salem in 2006 to research events and visit local sites here and in Danvers (Salem Village.) Elizabeth How’s experiences became the spark of inspiration for McQueen’s fall/winter 2007 collection, In Memory of Elizabeth How Salem 1692. This collection featured fashion designs drawing on themes of witchcraft, paganism, the occult and religious persecution to evoke powerful women from ancient Egypt, Puritan New England, to imagined enchanted futures. The press sample beaded velvet gown, now in the PEM collection, dazzles in the center of the gallery with an adjacent panel and projected slide show featuring images produced by from the 2007 fashion show.

Alexander McQueen dress in the gallery. Photo by Diana DiRamio/PEM.

Additional documents explore the aftermath of the trials and the process of exoneration, reversal of convictions and attainder (seizure of personal possessions), payment of restitution and restoration of “innocency” for the victims of the trials. This process began in 1696 and accelerated after 1700 as victims or their family members petitioned the Massachusetts General Court and legislature. Legislative actions in 1711-1712, 1957 and 2001 formally cleared the names of most trial victims. However, earlier this year, middle school students in North Andover made national news when they and their teacher approached a state senator to petition the Joint Committee on the Judiciary to exonerate Elizabeth Johnson Jr., convicted of witchcraft, but whose name did not appear in previous legislative actions overturning convictions. The bill is still pending.

Alexander McQueen dress in the gallery. Photo by Diana DiRamio/PEM.

In 2014, photographer Frances F. Denny began a project that explores the archetypal witch figure and what it represents today, after learning that she descends from Salem witch trial magistrate Samuel Sewall and Mary Bliss Parsons, a woman tried for witchcraft in the 1670s. Gordon worked with Denny to select 13 portraits from Major Arcana: Portraits of Witch in America that depict diverse individuals from across the United States who self-identify as witches and trace their personal pathways that led to their practice. The subjects present an array of ideas about contemporary witchcraft: Wiccan high priestesses, shamans, healers, herbalists, neo-pagans, mystics and activists. These individuals reclaim “witch” from its past and redefine witchcraft in their own words.

Frances Denny in the gallery with her portrait series Major Arcana: Portraits of Witches in America. Photos by Kathy Tarantola and Diana DiRamio/PEM.

As the exhibition wraps up, we return to the themes of “reckoning and reclaiming” expressed in the title. A team of PEM staff from 10 departments contributed to and developed the title, The Salem Witch Trials: Reckoning and Reclaiming. These included staff from Exhibition Planning, Exhibition Design, Curatorial, Library, Marketing, Education and Civic Engagement, Collections Services, Registration, Merchandising and editors in two different departments. After identifying, discussing and testing over 60 titles and variations, this title gained traction because it captures the dynamism found in the past and the present, and the coming to terms with an historic crisis that draws out instructive parallels and important lessons relevant in contemporary life. We invite people to stop at our Visitor Response station near the exit to share their own perspectives on what the 1692 Salem witch trials means to them, express thoughts on the contemporary artists’ creative responses to this historic event or leave your own example of creative expression. 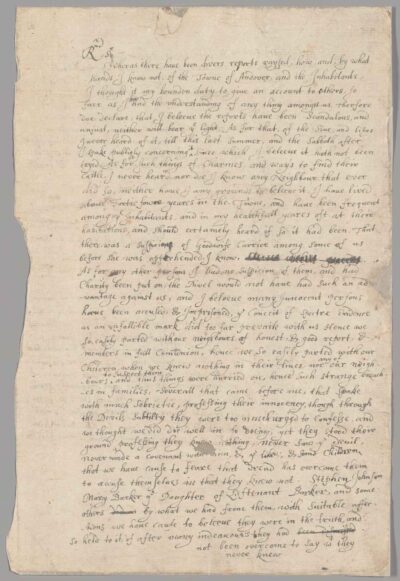 The final alcove in the gallery offers a postlude on the Salem witch trials inspired by a 1693 document, a reflection by Rev. Francis Dane, one of the brave voices who spoke against the trials. He expressed regret that the community was not more tolerant and forgiving and offered the following reflection:

Our sin of ignorance,
wherein we thought
we did well, will not excuse us
when we know we did amiss.

—Statement of Francis Dane Sr. regarding some of the Andover accused, January 2, 1693

The Salem Witch Trials: Reckoning and Reclaiming is on view until March 20, 2022.

TOP IMAGE: An evening dress by designer Alexander McQueen, on view in PEM's The Salem Witch Trials: Reckoning and Reclaiming. Dress is from the In Memory of Elizabeth How, Salem, 1692, Ready-to-wear collection, fall/winter 2007. Velvet, glass beads and satin. Gift of anonymous donors in London who are friends of Peabody Essex Museum, 2011.44.1. Photo by Bob Packert/PEM. 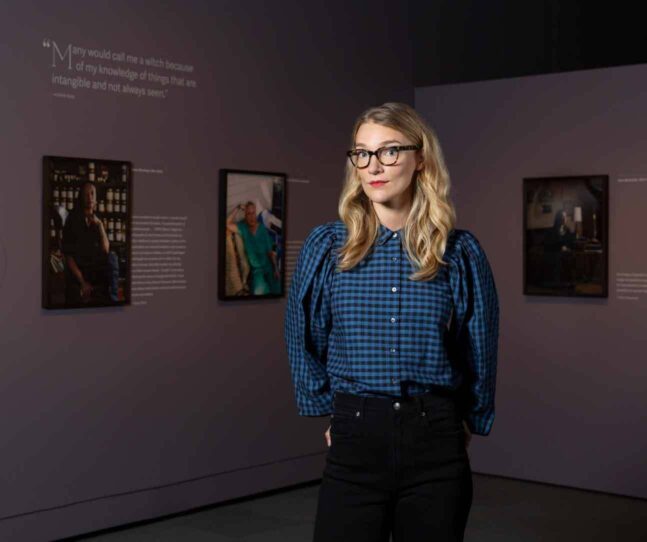 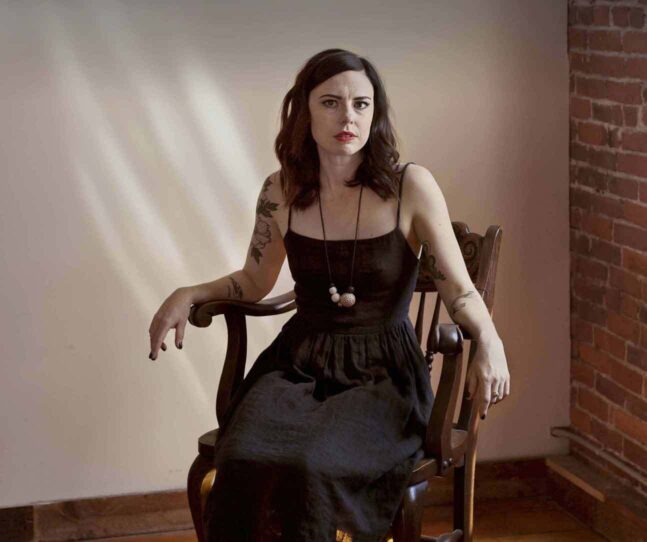 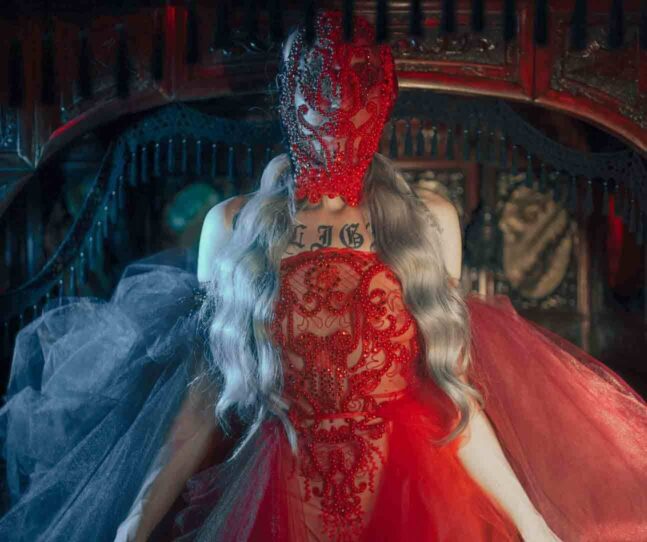