Aboard the Dashing Wave

Taking a dive in the Phillips Library's extensive maritime collections, I found a fascinating passenger’s journal from the clipper ship, Dashing Wave, in 1859-1860. From there, I started gathering other material related to this ship for a multi-faceted glimpse of just one of the thousands of vessels in our collections. 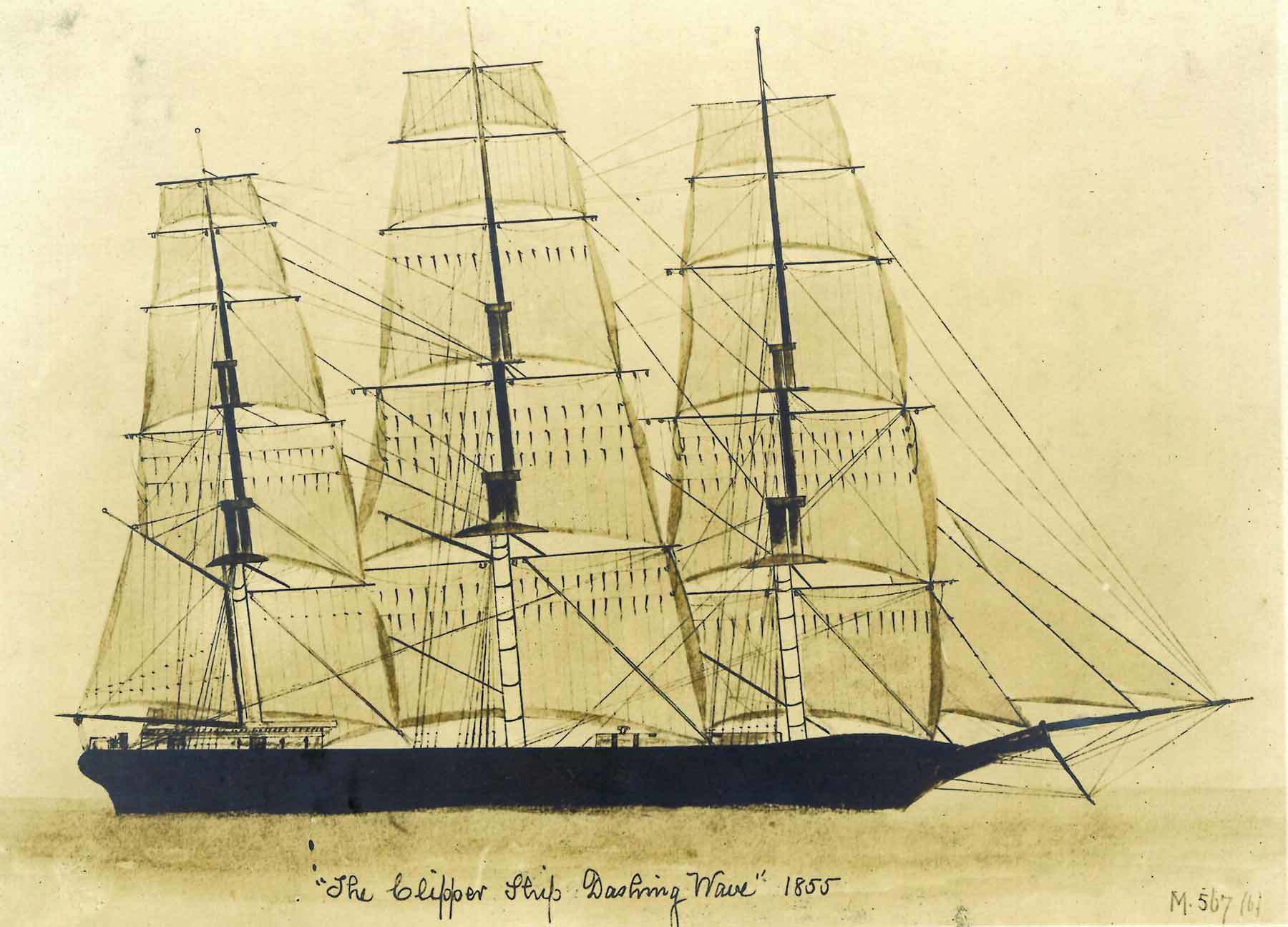 Sketch of the Dashing Wave in 1855

Before boarding, passengers or shippers might learn about an upcoming voyage through clipper ship cards, a type of advertisement passed out by shipping companies. There are several cards for Dashing Wave in the Sailing Ship Card Collection, such as the one below. 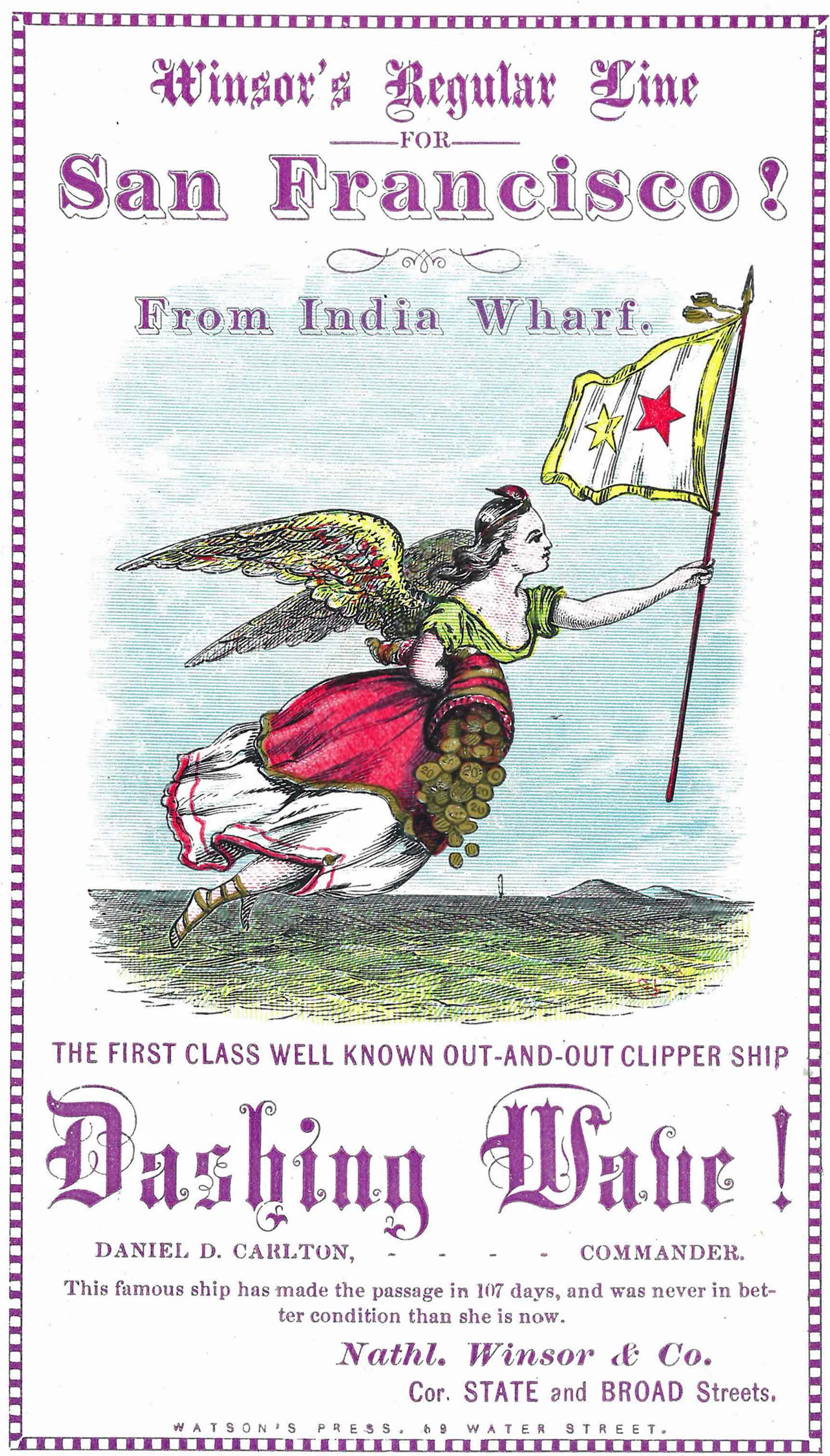 While the Phillips Library has over 3000 logbooks, passenger’s journals are harder to come by. They tend to be more narrative and less rigid than logbooks. They’re also more likely to describe events on land, which can offer an interesting outsider perspective on trade ports all over the world. 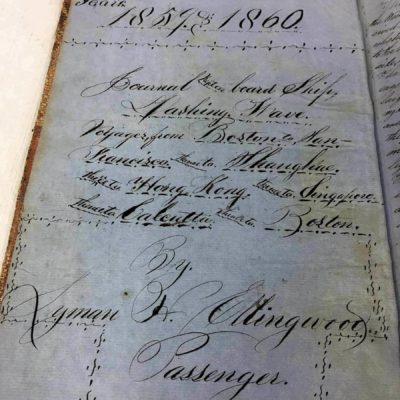 The journal of Lyman H. Ellingwood describes his time at sea and on shore, albeit with little punctuation. The voyage he took part in sailed from Boston to San Francisco (via Cape Horn) and onto Asia, including Shanghai, Kolkata, and Singapore. 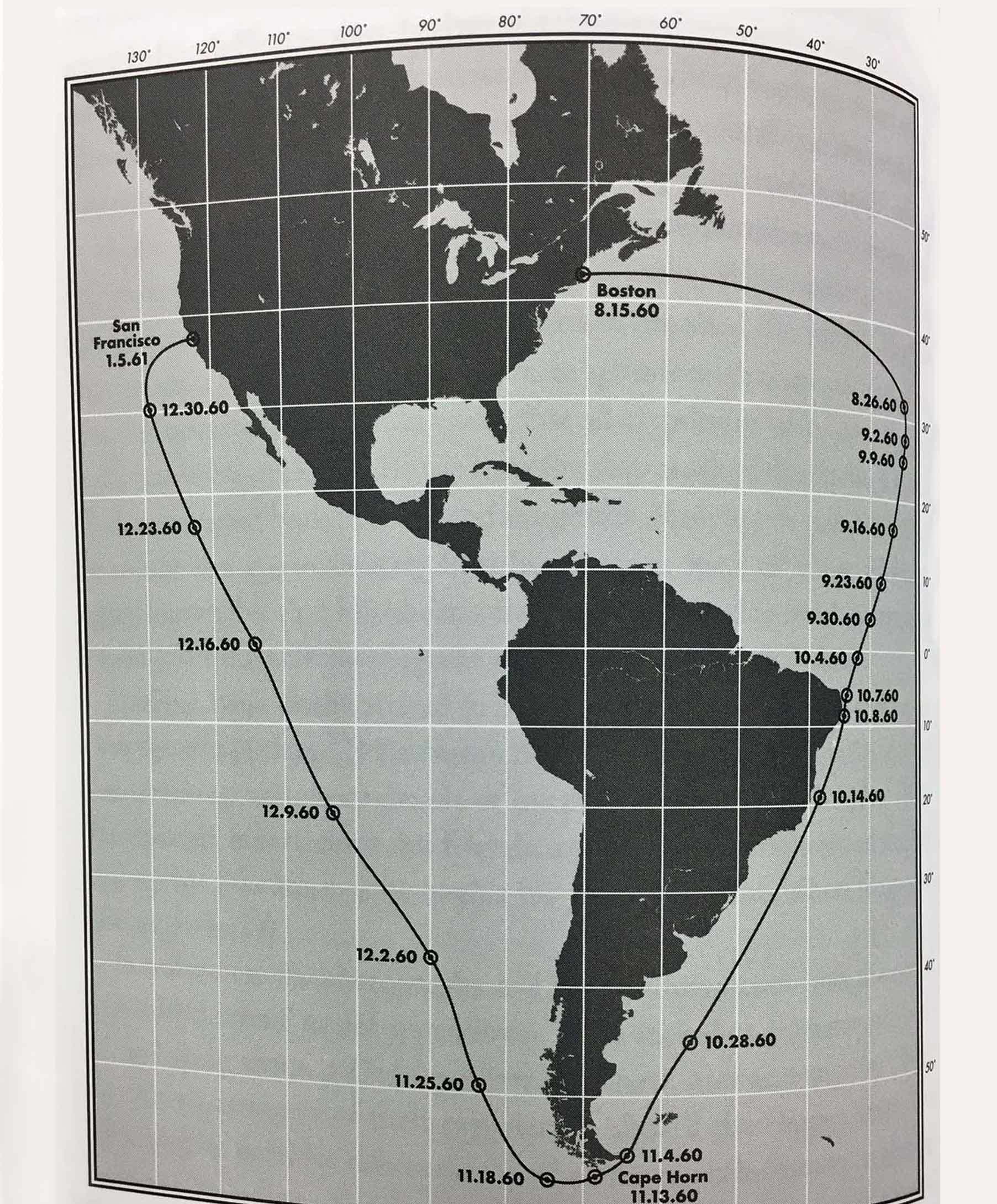 Boston-San Francisco route taken by Dashing Wave in 1860, from Cruise of the Dashing Wave

Much of the journal describes a typical day at sea, Ellingwood’s experiences and his interactions with other passengers. [Please note: some of the handwriting is difficult to read, and transcriptions are liable for error]

October 11th, 1859
“Clear and fine day, light wind from the S.E. …I did some washing only chance I have had for a long while, the Captain got in to quarl with Jon, about using a clothes line; this afternoon I stayed on deck till supper time after supper Mr. Shaw gave me a cigar, so I walked the deck with him till 8 bells, the wind hauled this eve dead ahead, sea quite rough!”

Ellingwood also illustrates his time in new ports:
Remarks concerning, San Francisco, and my Sojourn there, for the space of about 4 weeks.

“Well here we are anchored in the harbor, from whence so much of the filthy luere have been scattered broadcast over the world, from whence so many people have entered these waters poor than Job ever thought of being, and have left in a short time richer in their own estimation than any…” 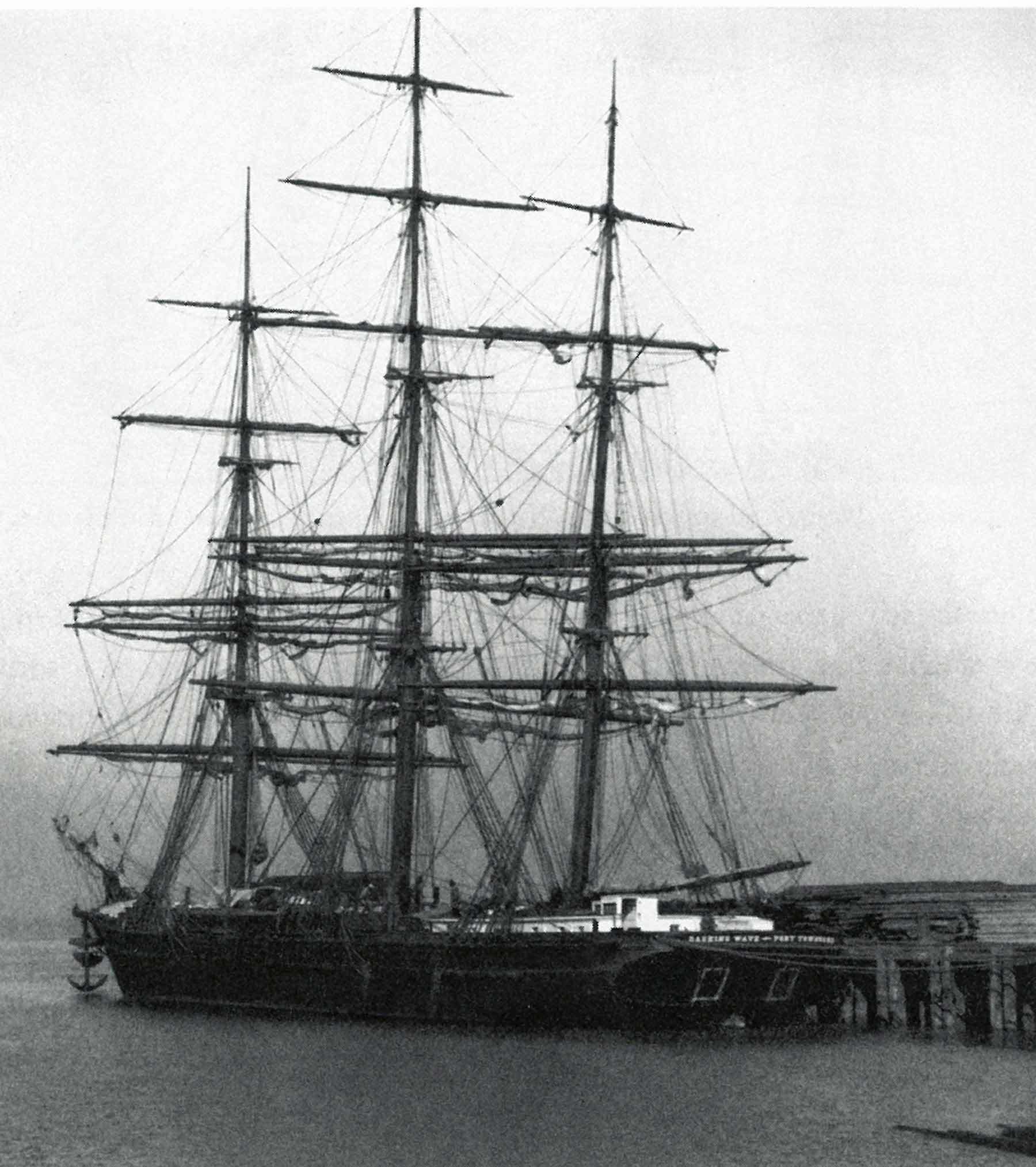 Photograph of Dashing Wave docked in San Francisco in 1889, from Cruise of the Dashing Wave

“Calcutta the City of Palaces, this name it well deserves…the mode of European life in Calcutta is as follows, Rise in the morn at 5 take a walk when the sun is not up and excersize/ return in time to take a bath, have your cup of coffee and toast, sit down, and read calmly til 9 when th[e]y generally take breakfast, in the hottest of weather, 10 o’clock is the hour, then if you have business go to the office, which is often about 11 and kept open till 5 P.M. The mass of people in Calcutta then take their daily drive, at 6, the carriage comes, and you go on to the strand, this is the great resort for everyone, and at 6 to ½ past 7 this strand or esplanade is crowded by all Calcutta…filled with Ladies and Gentlemen, and all description of Carriages, this is the fairest, gayest scene (one of them) in the world.” 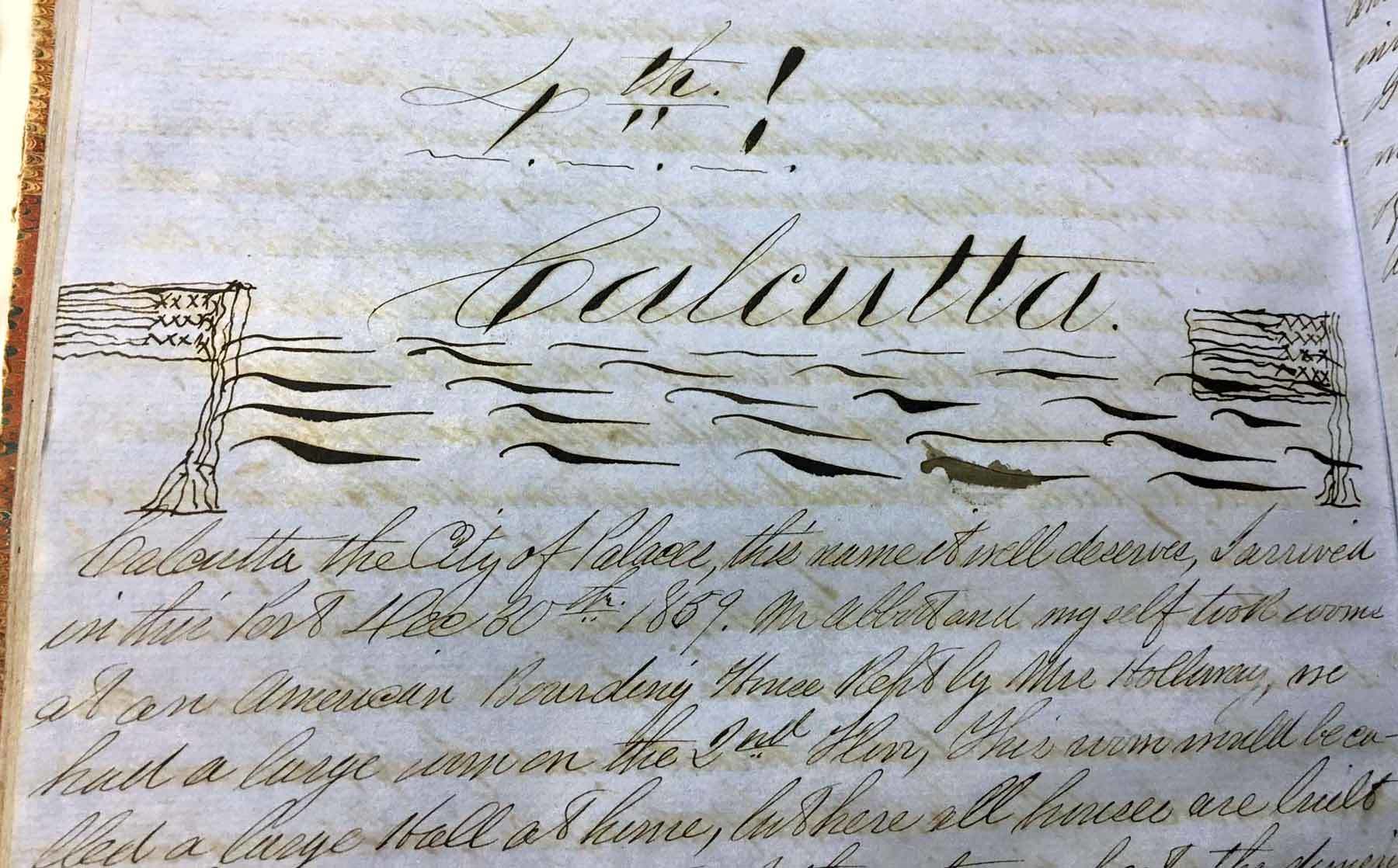 Arrival in Calcutta, from Ellingwood journal

Set side-by-side, the differences and similarities between the structured logbook and Ellingwood’s journal are apparent. Both give prominent attention to the date, time, sails, and weather, all of which are critical information at sea. The journal is more narrative and focuses on Ellingwood’s personal experience of sailing. The logbook is more formulaic, with almost bulleted notes concentrated on the goings on of the ship, providing exact information about latitude and longitude, speed (K.= knots), course, and winds throughout the day, with no mention of the writer.

March 15, 1859
“This morning the weather holds the same, saving, fair wind, fresh breeze, no evil set, we are now under reefe, the Officers say she could carry her Royals easily…we are going might as well be going 14- continued to own til noon, meridian; observe no observation, [2] P.M. the S.E. trades came in, with a squall, ship still under reefe, 4 wind died away to a dead calm, continued so all night, a large shark [played] around but he would not take the hook, there were three pilot fish with him, three will pilot him to any thing eatable!”

Remarks, the 15 day of March 1855
“Commences with fine breezes and frequent rain squalls.
At [12:]30 P.M. tacked Ship to East Wind
At 1 P.M. in Royals At 6 P.M. tacked to the Southward
At 9 P.M. set Royals
At 7 A.M. the town of Pernanbuco bore West about 12 miles list
Latter part light breeze and pleasant.” 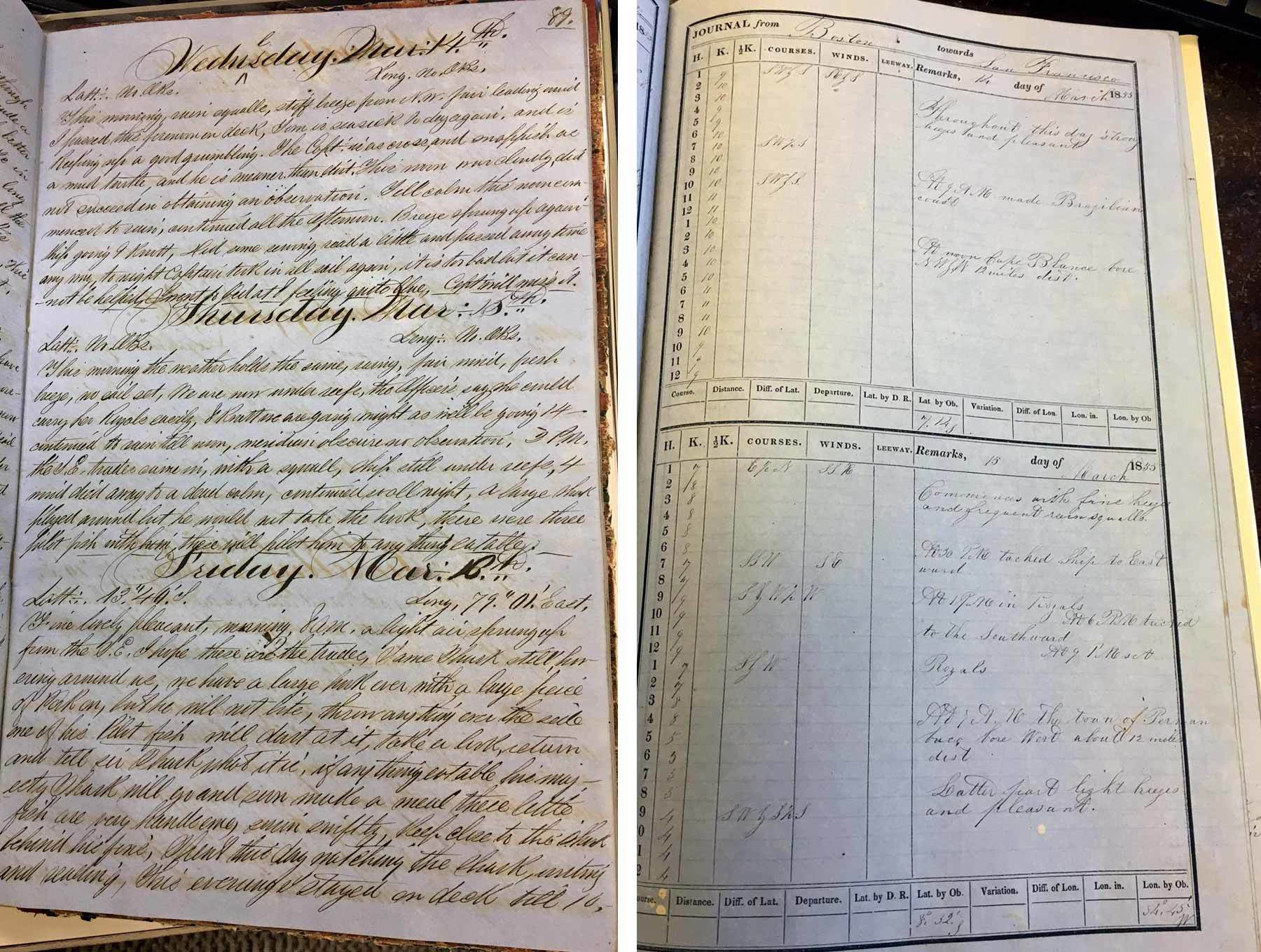 Comparison of the layout of journal vs the logbook

Unlike a journal that records an individual’s experience, logbooks are records of the navigation and activities of a ship and its crew during a voyage. They also could be legal documents accounting for accidents or unplanned actions taken by the captain or crew. The Dashing Wave logbook was written by Simon O. Dalrymple in 1855 during a voyage from Boston to San Francisco. Dalrymple liked to practice his handwriting, as you can see in the title page by the way he wrote his name twice and “F” or “Fisk,” the captain’s name, a few times. He also hit the nail on the head and practiced writing “Penmanship” later in the logbook. 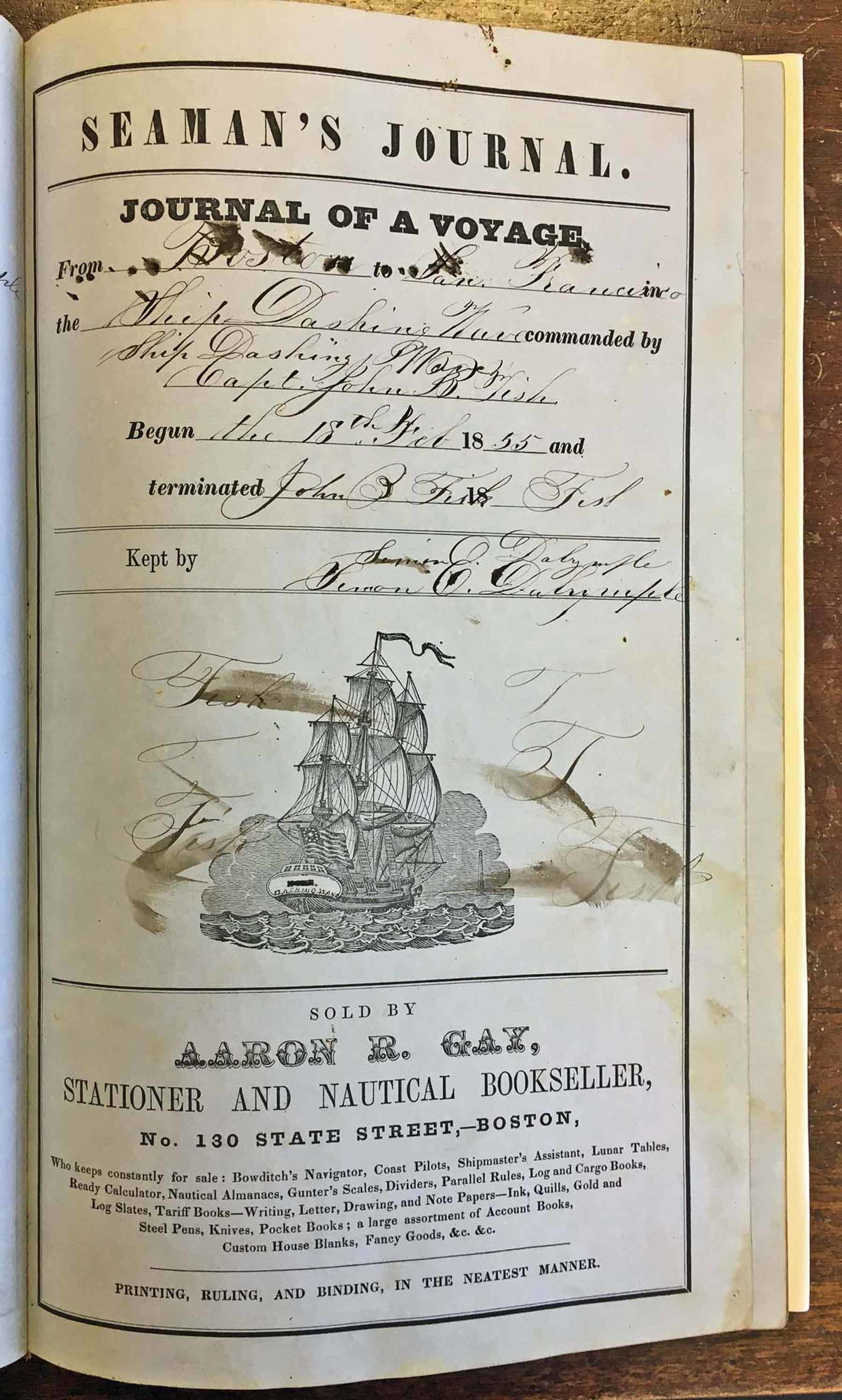 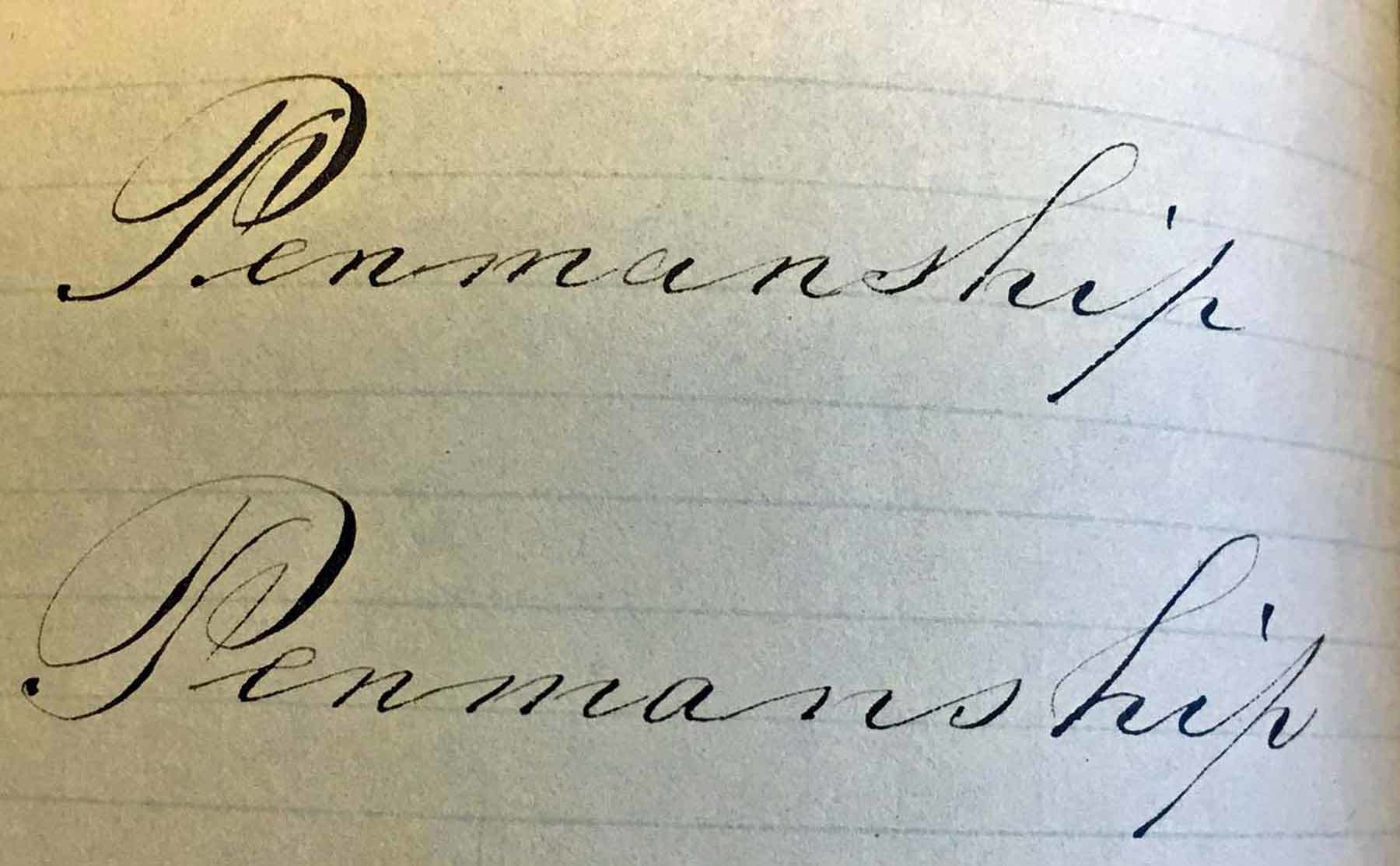 The logbook was purchased in Boston from a “Stationer and Nautical Bookseller,” pre-formatted for the recording of key nautical data aboard the ship. Log keepers did not always keep to the formula, and sometimes they imbued the log with their personality. Dalrymple for instance included a few sketches of the Dashing Wave, as well as a few poems that seem copied from psalms and hymns. 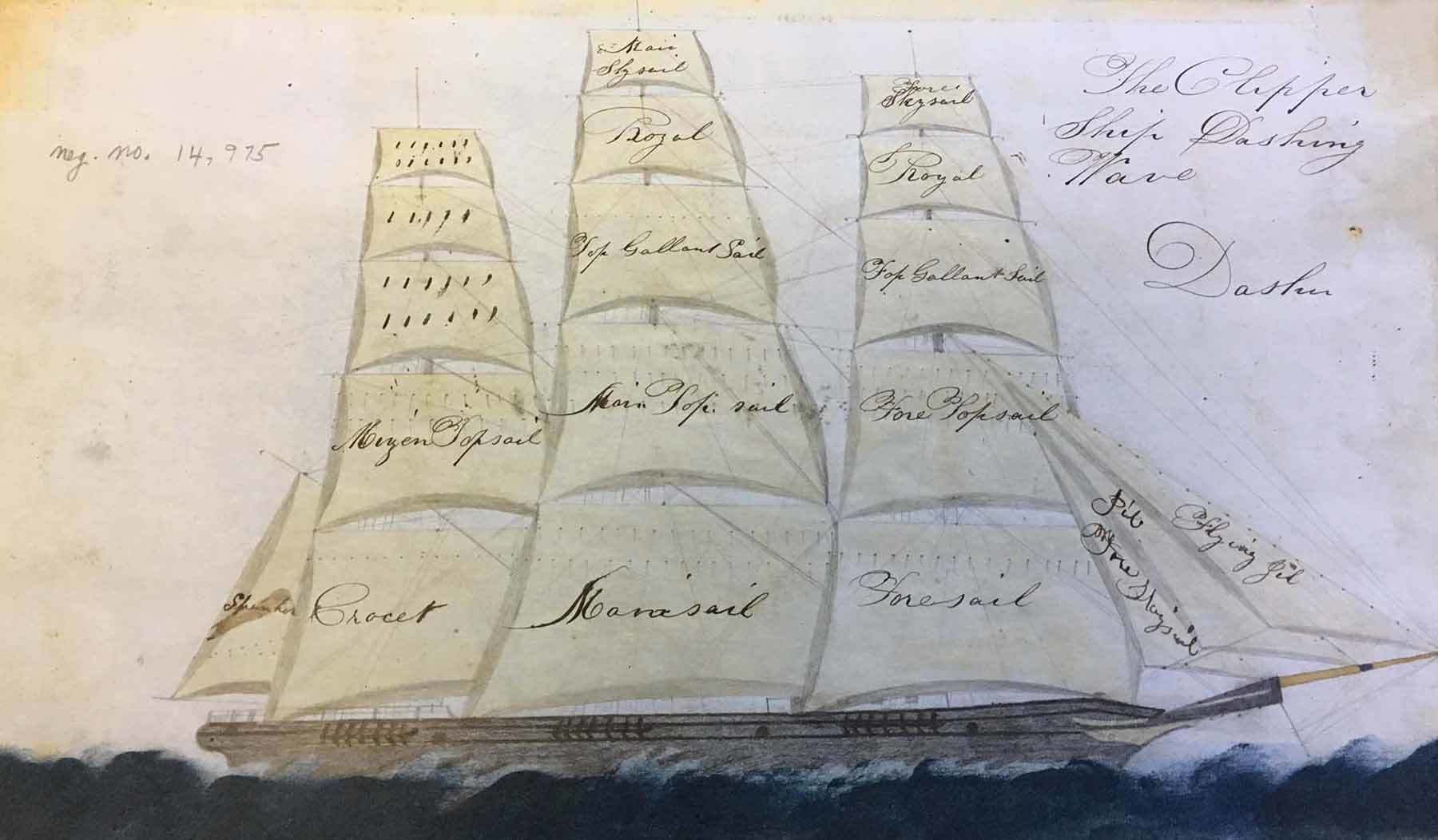 Labelled sketch of the Dashing Wave in Dalrymple logbook

Life to life, and dust to dust!
Crist hath bled upon a tree,
There the promis, ours the trust,
We are weak, and God is just

But drops of grief can ne’er repay
The debt of love I owe
Here Lord, I give myself away,
Tis all that I can do

!Alas! to think when a child
That has no childish days
No happy home, no counsel mild
No words of prayer of praise 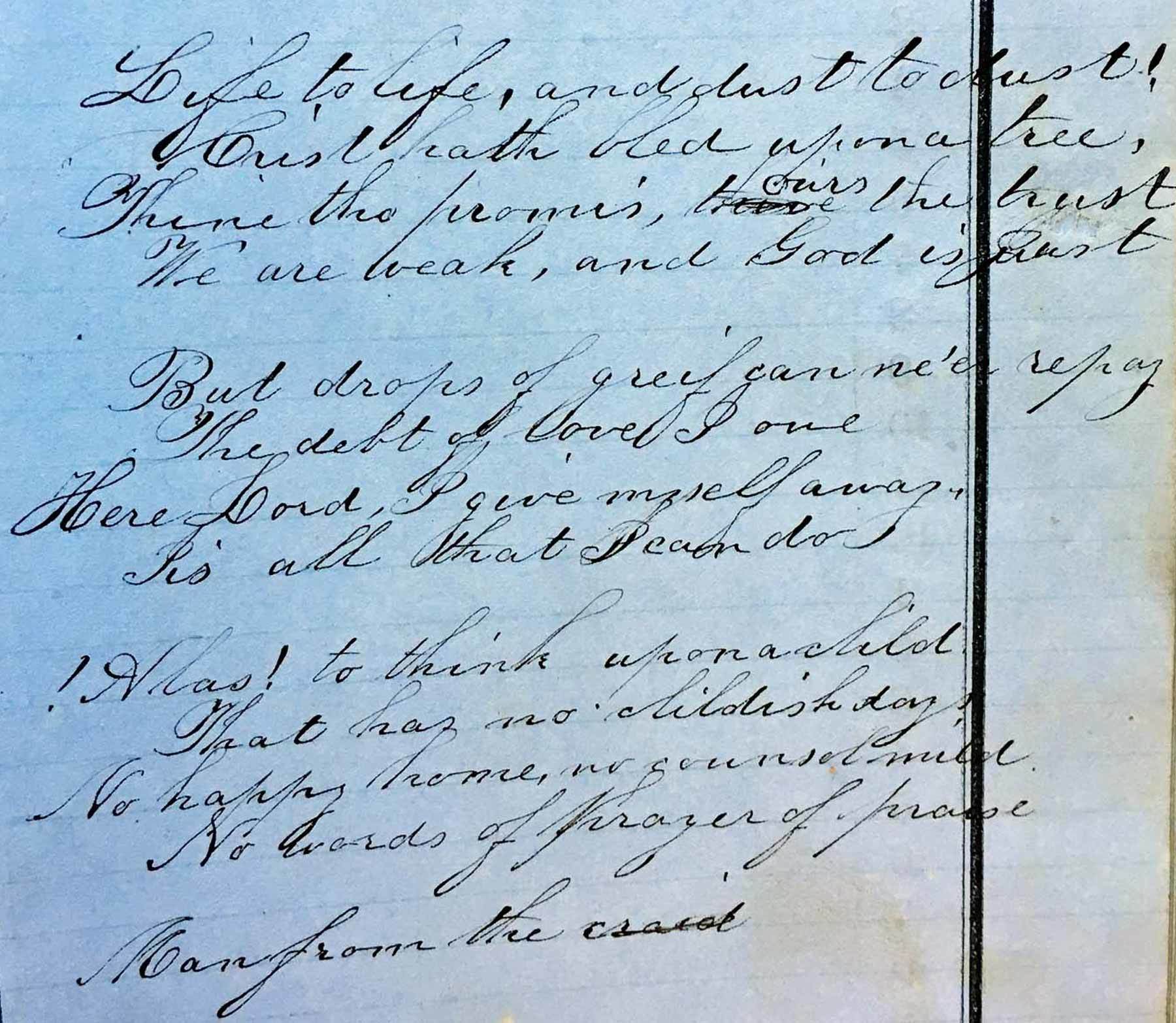 Both these items are in the logbook collection, but the Phillips Library has a multitude of other maritime collections. For instance, the Fernald and Petigrew Shipyard Records contain material related to shipbuilding by a company in Portsmouth, NH.  In this collection are items related to the building of the Dashing Wave: 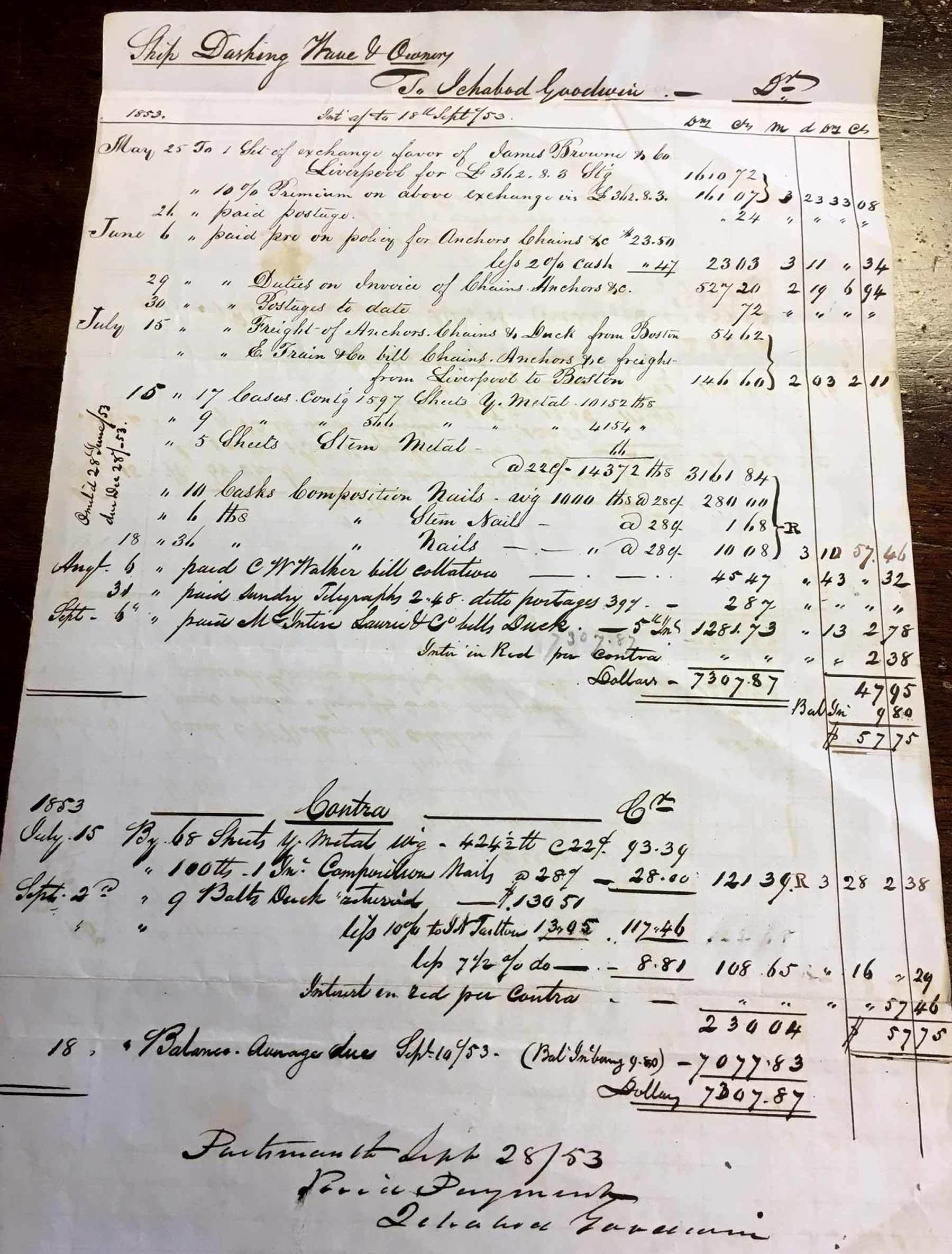 Invoice for the ship Dashing Wave to Ichabod Goodwine in 1853 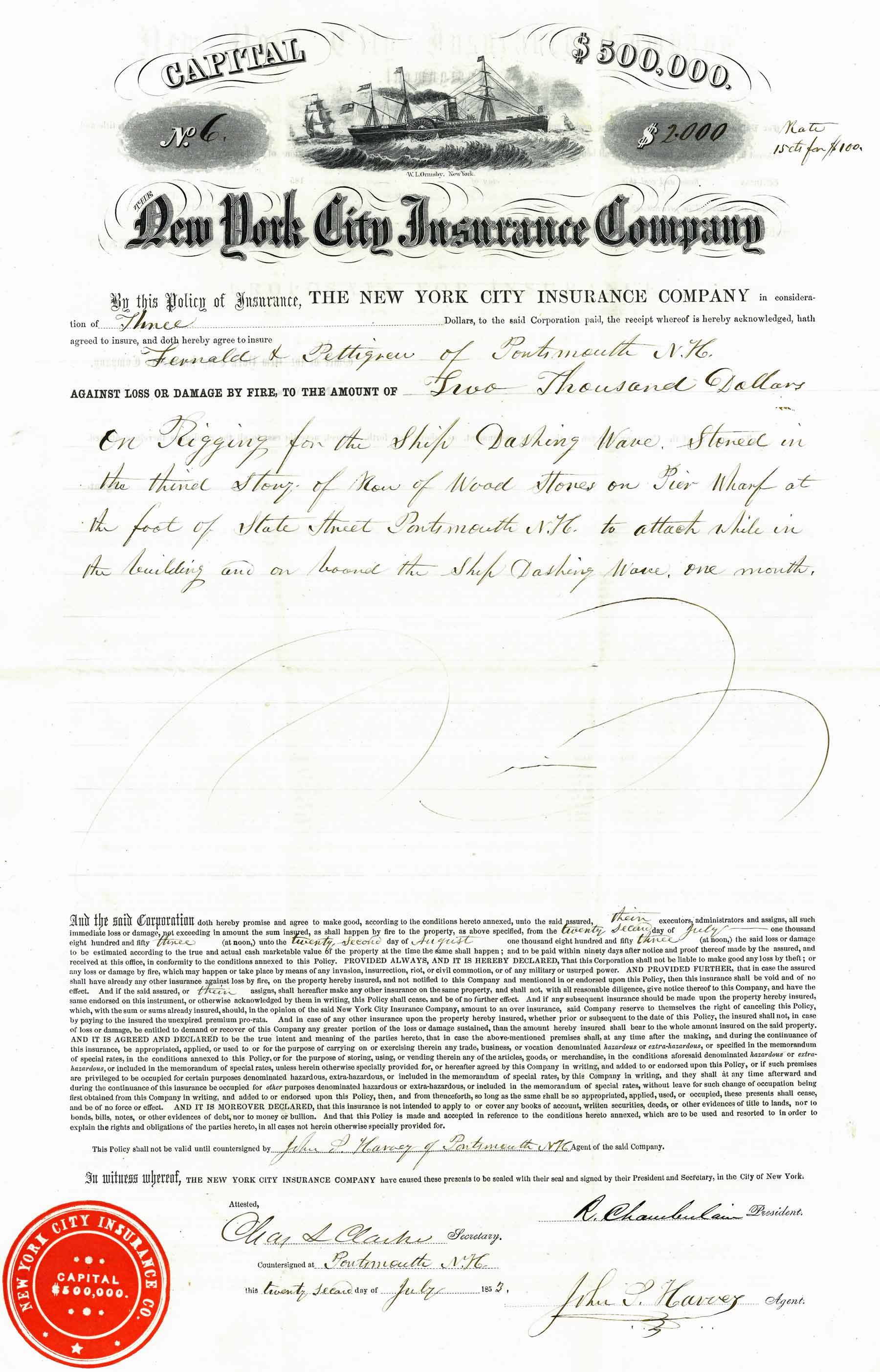 One-month insurance plan with New York Insurance Company for the rigging of Dashing Wave while it was stored on Pier Wharf in Portsmouth, covered for $2000 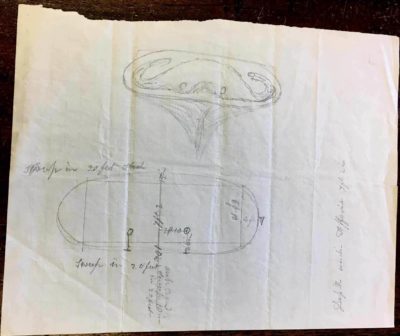 Of particular note is an invoice from William B. Cleason, Ship and Ornamental Carver and Gilder. Fernald & Petigrew purchased from Cleason a figurehead; gilding trimmings; carving 47 pairs of grape vine with “Horns of Plenty to match;” trusses; and gilding of 54 books. The reference to books may refer to books of gold leaf used in the gilding. The total cost for all this work was $292.25; today, that would be about $8500! Fernald & Petigrew paid $250.00 on August 4th and the remaining $42.25 on August 30th. 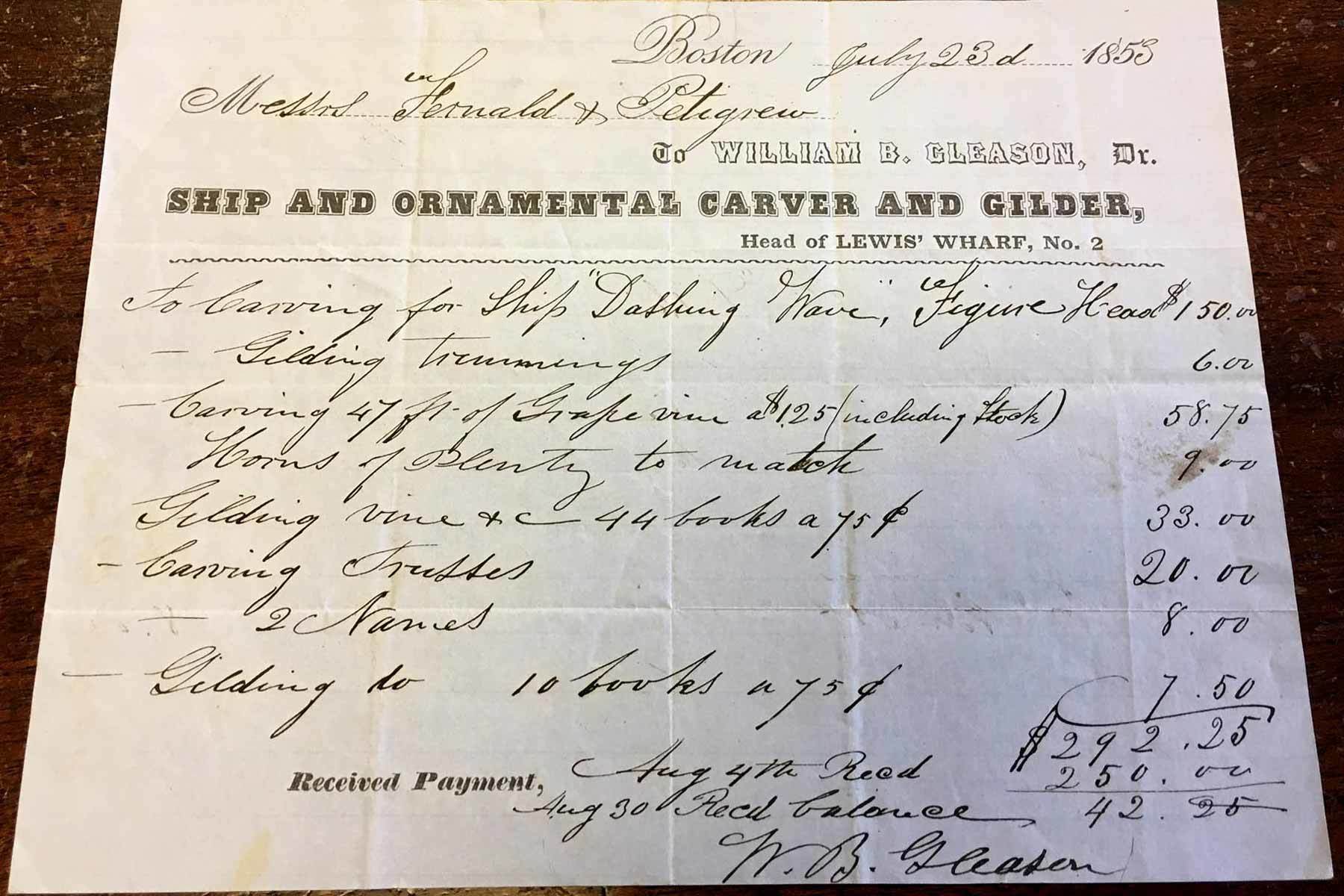 Invoice from ship carver and gilder

The Henry Hastings & Company Records document one of the largest ship owners in Boston, from the mid to late nineteenth century. In this collection are account books for several ships, including the Dashing Wave, such as the one below which records the purchase of sails in preparation for a voyage to San Francisco. 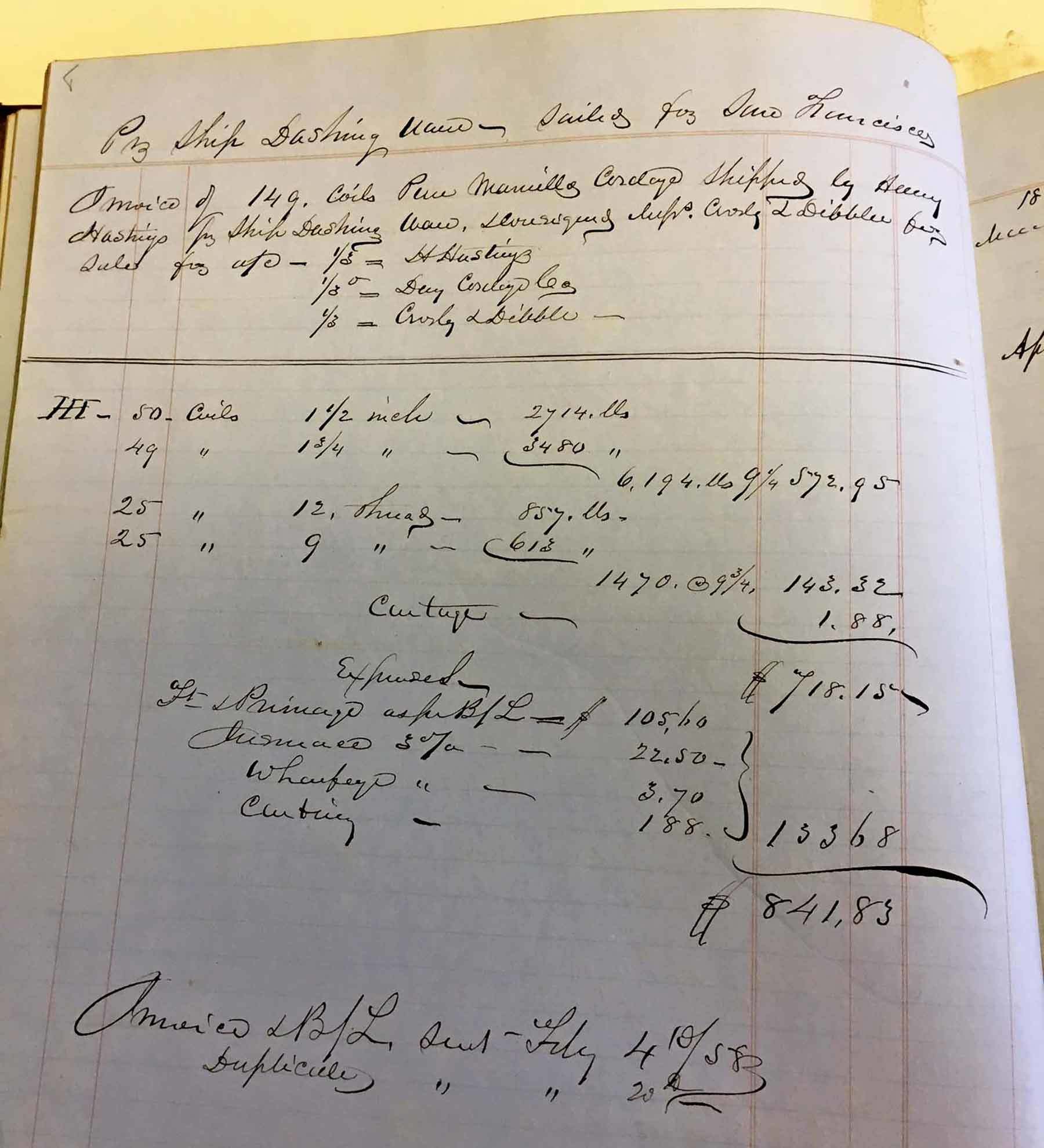 In additional to our extensive manuscript collection, the Phillips Library also holds a large print collection related to maritime history and art. The Cruise of the Dashing Wave is a modern book which tells the history of this ship. The book transcribes another passenger journal (that of Philip Hichborn in 1860) from the National Archives, and includes additional sources and photographs. 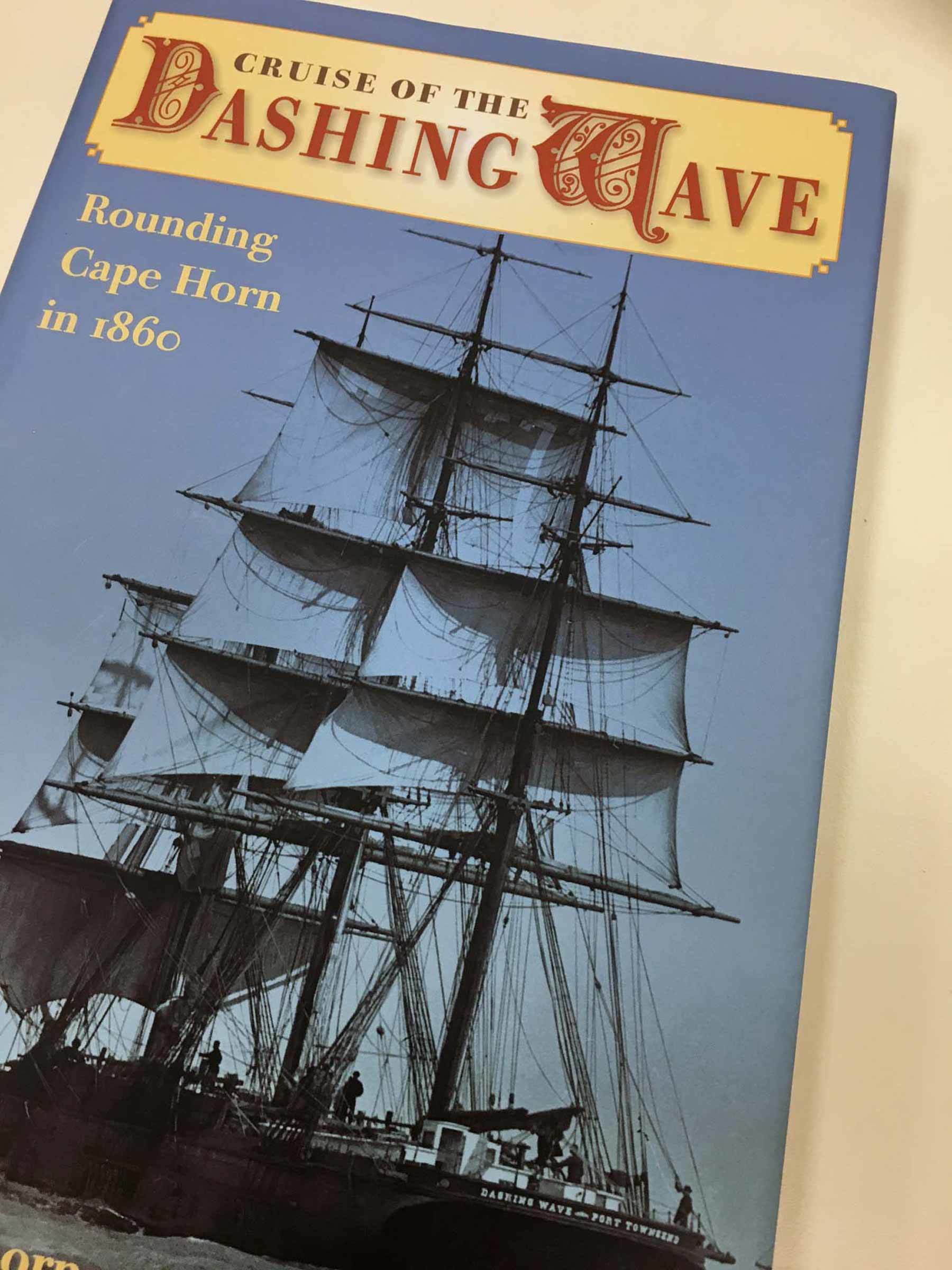 Cover of Cruise of the Dashing Wave 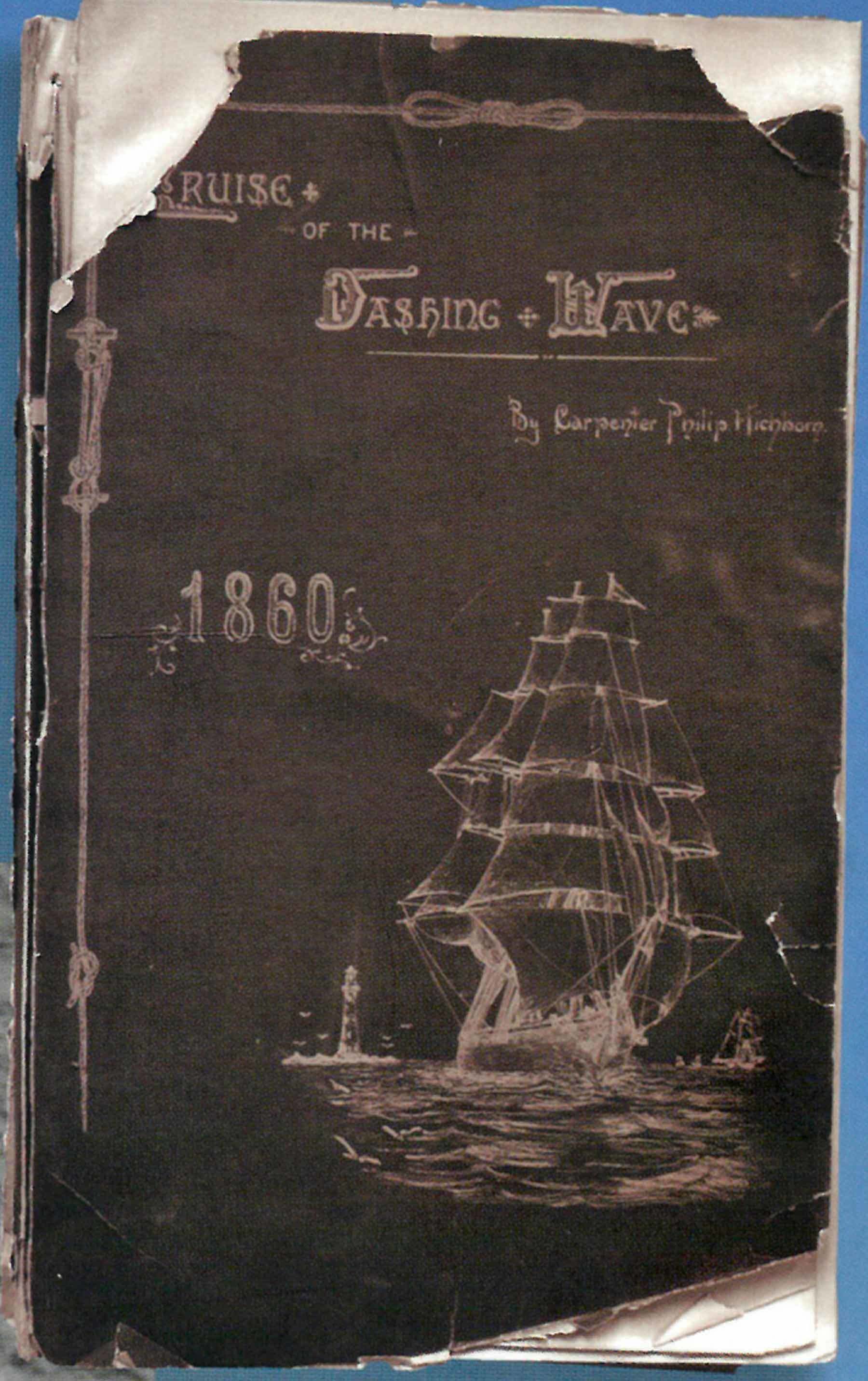 For instance, the Dashing Wave was “one of the most durable clipper ships ever built.” Thanks to the work of Fernald & Petigrew, she has a working lifespan of more than 66 years, and “outlived nearly all other wooden clipper ships.” However, she was not very fast, averaging about 120 days on a Boston to San Francisco voyage. That’s how long Ellingwood’s journey took (April 4-August 2, 1859). It may not have been the fault of the ship, as he notes that “if we had have had a smart Captain…we…[could] have been in in less than 100.” 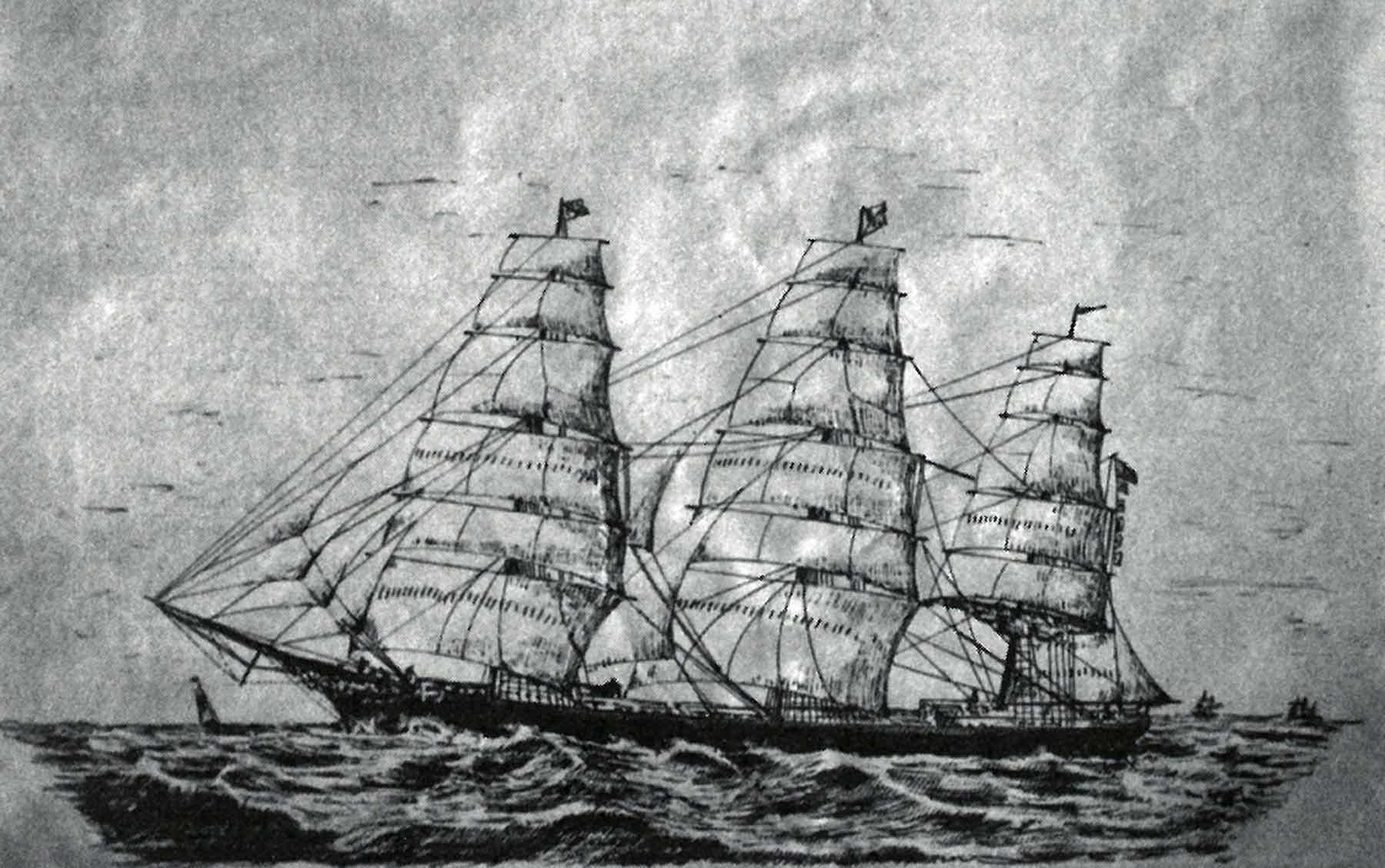 To learn more about this or one of the many ships documented in our collections, visit or contact the Phillips Library. And if you want to immerse yourself in the ships of a later period, check out the exhibition Ocean Liners: Glamour, Speed, and Style, at the PEM until October 9, 2017. 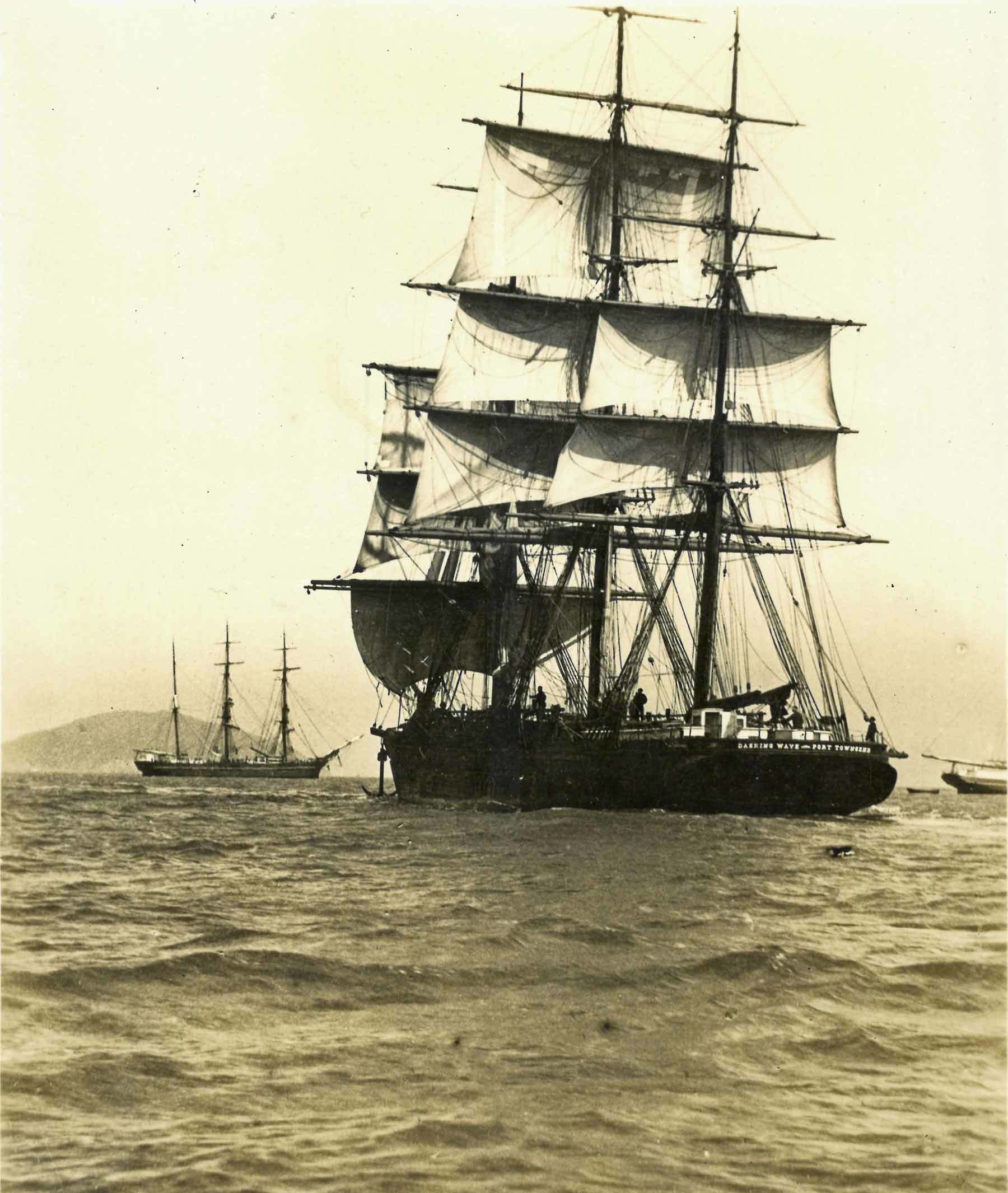 Photograph of the Dashing Wave in San Francisco Bay, around 1890