A word with Bernie Krause

Bernie Krause is an American musician and soundscape ecologist who has dedicated his life to recording the Earth’s natural habitats. His work is featured in The Great Animal Orchestra: Bernie Krause and United Visual Artists, a new exhibition organized by PEM and the Fondation Cartier pour l’art contemporain and presented as part of PEM’s Climate + Environment Initiative.

I had the pleasure of interviewing Krause when he was here for the exhibition opening in November. Below is an excerpt from our conversation. Look for a future Q&A with Matt Clark of United Visual Artists of London who helped create the stunning visuals for this immersive experience.

An MBTA bus in Boston helps spread the word about the new PEM exhibition. Image courtesy of Outfront Media.

Q: How would you describe the experience of The Great Animal Orchestra?
A: The Great Animal Orchestra is a composite of seven different habitats from around the world, marine and terrestrial. These pieces express the life that's present in these given habitats through the ways that animals vocalize. What's interesting about this piece is there's very little narrative that describes what it is people are hearing or seeing. It's completely expressed on the screen and through the sound system. When you see or hear a habitat like the ones that we have here, all of these habitats — whether they're tropical, arctic, subarctic or marine — show how these animals find these acoustic territories in which to vocalize. Healthy ecosystems sound organized. When you have a healthy habitat, it's like a musical score. The low frequency sounds are at the bottom of the score, in the bottom line with the basses. The high frequencies are in the higher range. Stressed systems that are noisy sound chaotic and incoherent; the sounds don't match. This is the first formal expression of how that all works together and how we're all part of that same system.

Q: What do you hope people take away from the gallery experience?
A: My main desire is that visitors come away with a sense of wonder about living organisms and the living world around us. We've had such great success in Europe with these presentations in Paris, London, and Milan, but also in Asia, in Shanghai and Seoul. We've had five venues where over a million people have seen this work. Everybody gets it whether you're 5 or 6 years old, or 80 years old.

Q: Are you the first person to do this type of work?
A: I'm one of the first. When I got my Ph.D. in 1981, when I completed it, there were probably six people doing this in the field. Now there are thousands. It's blowing up exponentially. A lot of people are getting interested in this, but it's very late in the game. These habitats, 50 percent of what I have in my archive, comes from habitats that no longer exist. We're not talking about single individual creatures. Whole habitats are gone. That's in 50 years.

Q: How do you make the transition from electronic music and working with musicians like The Doors and working on films like Apocalypse Now to recording nature?
A: I had an album to do for Warner Brothers with my late music partner, Paul Beaver. We had just introduced the synthesizer to pop music and film on the West Coast. We decided on the theme of ecology, which in 1968 was unknown to the world really. There was very little expression about the dangers that our actions were bringing to the natural world. I marched off into the field somewhere north of San Francisco in Muir Woods and turned on that recorder one late October afternoon. The soundscape was so extraordinary. Here I was outside with the stuff in my earphones and this microphone. I said, "My God, I got to do this the rest of my life. I have got to figure out a way and make this happen."

Q: When did you first realize that natural habitats could sound like an orchestra?
A: One night while I was in Kenya in a camp, I had been working for many hours, and I was very tired. I was lying on my bunk with my headphones on, just listening to the night ambience. I switched on my recorder. In my mind that was half present, I heard the sounds as orchestral. I heard these sounds arranged in a very strange way that I'd never really heard before. I made a note on the tape box because we still recorded tapes in 1983. When I got back to the studio in San Francisco, I racked it up on the playback machine and ran it through a spectrogram. Sure enough, that stuff was arranged like I was hearing it. I thought to myself, I think there's something here. I've got to go listen to more of those tapes and begin to think of ways of communicating this information to a wider audience.

Q: How does it feel to listen to these recordings years later?
A: As I've listened to this material over a period of time, it's become clear to me that these are narratives. These are stories. These are the original stories that are told about the living planet. I haven't changed my mind about that in any way. They become more resonant with me every time I hear them.

Q: Where's your favorite place to record?
A: My favorite place in the world to record is Alaska because there is a place three times the size of France. There's 730,000 people there. The problem with Alaska right now is that it's melting. The permafrost is melting. The glaciers are melting. One of the things that we show here in the exhibit, the Yukon Delta. If you can imagine just sitting there in your campsite, it's a place where millions of birds gather in the springtime to breed and fledge. They're all nesting on the tundra around you. You've got to be very careful where you step so you don't step on a nest. These birds come from as far away as South Africa and New Zealand to this one spot in the Arctic. There are millions of them. They come from as far away, round trip, as 53,000 miles. Can you imagine that? These Arctic terns fly over these massive bodies of water to get to this one spot. To me, that's astonishing.

Bernie Krause sets up to record in the field. Photo by Masha Karpoukhina.

Q: In 2017, your home base in California was destroyed by wildfires. Can you speak to that in terms of your ongoing work and how the archive was saved?
A: My wife, Katherine, and I lost everything in the Northern California fires. It included all of the early recordings that I have, all of my equipment, all of my journals, which I didn't have backed up, and all of my photographs. Everything, a whole lifetime of work, was gone. Luckily, in March of 2017, I had decided that I was going to back up all of my material in the archive and to get it offshore. The reason that I had that idea in mind was because there was an attitude in America of not only denying climate science, but also trying to change the narrative, that the problems didn't exist. In speaking to some of my friends at NASA and the Environmental Protection Agency, it became clear that they were getting their data offshore too. Luckily, six months before the fire, I had these hard drives safely placed at the Fondation Cartier. 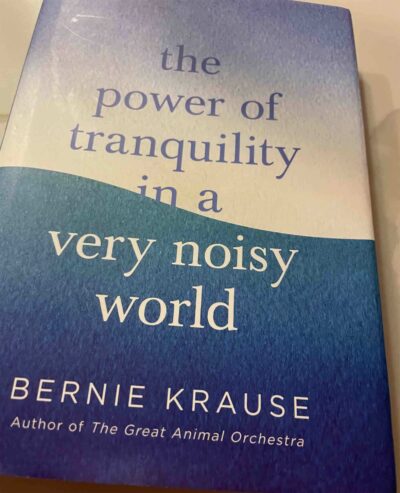 Q: What made you write the recently published book The Power of Tranquility in a Very Noise World?
A: I wanted to expose the issues of noise. The book is a long essay on that very subject, how noise affects us. I wanted people to know about the history of noise in the United States. The Japanese learned some important lessons about preserving natural sound and natural areas. In the late '80s, there was a fellow in Japan who started a thing called "shinrin yoku" or forest bathing. The idea was when you're feeling stressed, go off into the forest somewhere where it's quiet and you hear natural soundscapes. Whether it's water in the stream or the wind blowing through the canopy of the trees, it's important to make that connection. The closer we are to the natural world, the better we feel.

When visiting the exhibition at PEM, be sure to catch the daily screenings of a new documentary directed by the French filmmaker Vincent Tricon and produced by Fondation Cartier, entitled Bernie Krause, A Life with the Great Animal Orchestra. Composed of unpublished archival footage and interviews filmed in California in 2021, A Life follows Krause through Sonoma County, where he lives with his wife, Katherine. 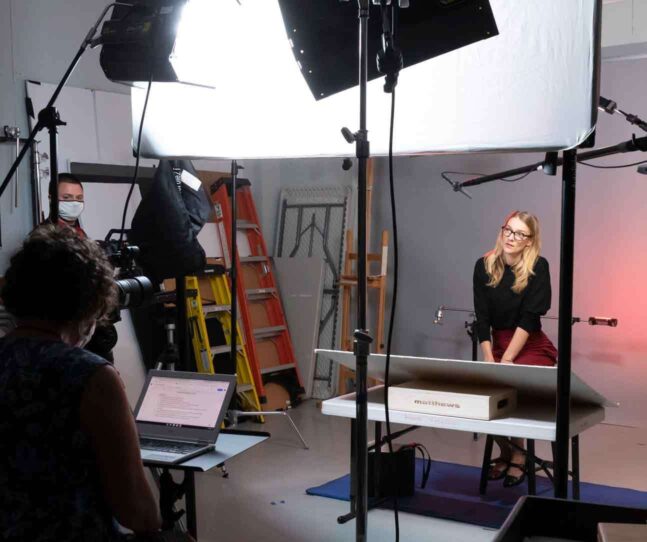 A word with Frances F. Denny 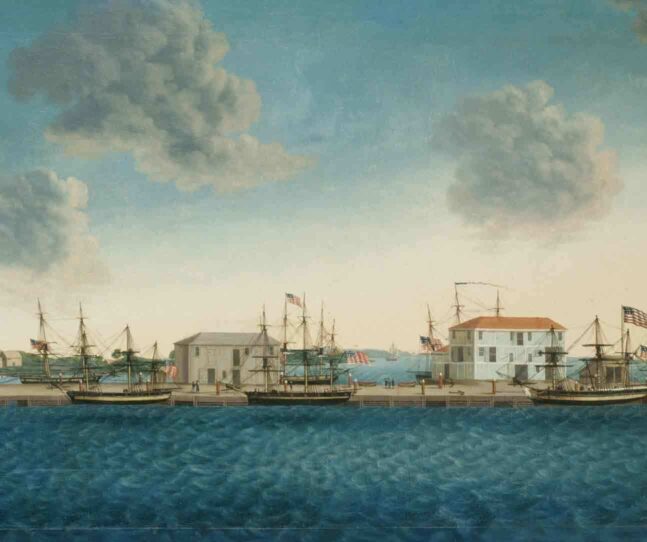 What the pandemic can teach us about tackling climate change 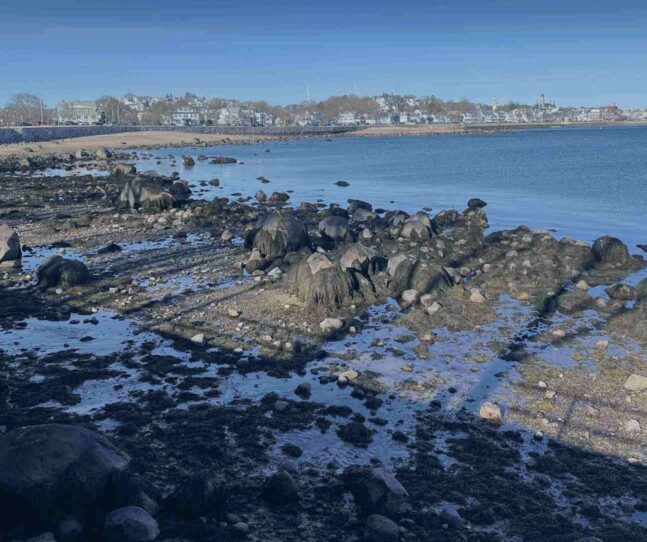